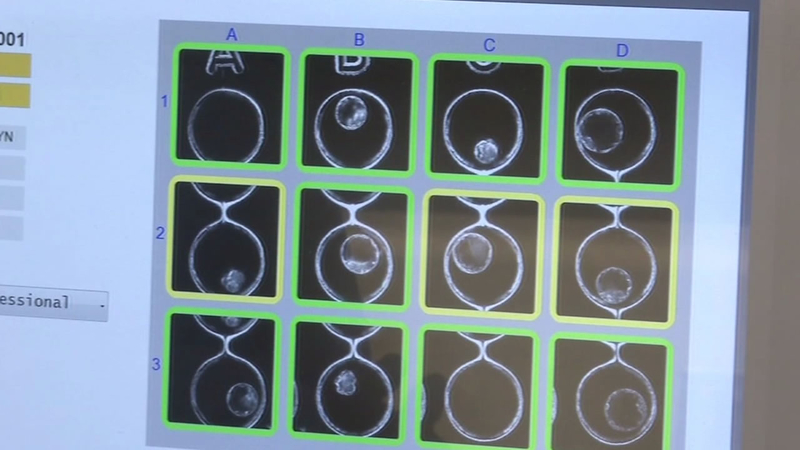 Courtnay Kenney says she and her husband are grateful, both for their son J.J., and the cutting edge technology that helped them get pregnant.

Like thousands of couples, they had turned to in-vitro fertilization or, IVF, but then their doctor told them about a device that might help their odds.

"It definitely increased our confidence that the right embryo for transfer would be selected," Kenney said.

Barry Behr, Ph.D., is the director of Stanford's in-vitro fertilization lab, and also the co-founder of a private device company called Auxogyn.

ABC7 News first profiled the company two years ago, when they were testing a system known as Eeva, which is designed to help doctors choose the healthiest embryos to implant.

"This is a tremendous leap forward in our ability to evaluate embryo viability," Behr said.

The Eeva system uses specialized cameras to spy on newly-formed embryos as they develop inside incubators. Images are recorded every five minutes as the cells divide and the embryos grow. Computer software then rates the quality of each embryo, based on the growth pattern.

He says the system offers more detailed information than what even a skilled embryologist could detect with the naked eye.

"I've seen in some of the data, and my own experience, that this should increase the likelihood of success about 10 to 20 percent," Behr said.

For Courtnay and her husband Michael, who participated in the clinical trial, the results have been life changing.

"We luckily got pregnant on the first round of IVF. It's really hard to believe that this is our son, and everything just worked out," Kenney said.

The company licensed the technology from Stanford to bring it to market and it's also currently in use in Europe.