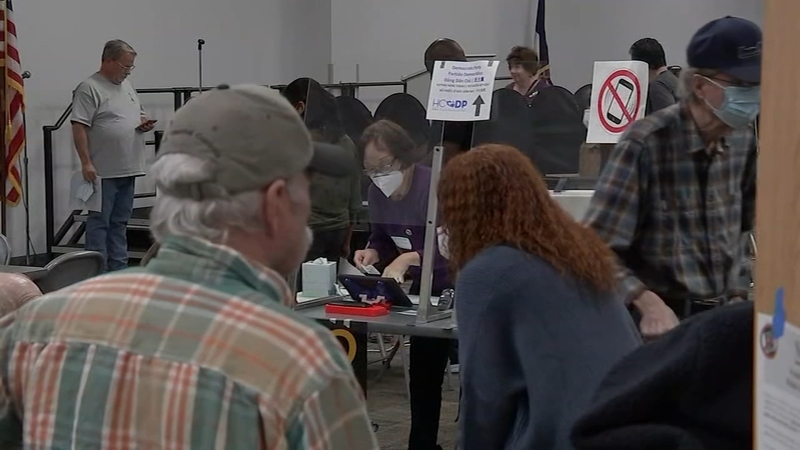 How SB1 impacted way Texans voted in the 2022 primary election

HOUSTON, Texas (KTRK) -- Beth Stevens, the chief director of voting for the Harris County Elections Office said in a press conference that SB1 has impacted the process for mail-in ballot voting and subsequently, significantly increased staff time at polling locations.

Farha Ahmed said her father Riaz has been voting via mail-in ballot for years in Fort Bend County. After SB1 went into effect, the mail-in ballot and application requires registered voters to add either their driver's license number or the last four digits of their social security on both the ballot and the envelope, and it has to match with what is already on their voter record on file.

Ahmed said her father received a call the day before Election Day, informing him that his mail-in ballot was rejected.

Ahmed said she took her father to a curbside polling location in Fort Bend County to cast a provisional ballot, which took about 40 minutes.

Ahmed fears that elderly voters or those with disabilities, like her father, did not have transportation or the necessary help, making it an even greater challenge to exercise their right to vote.

"It was easier to come in and cast a ballot in-person than trying to correct the paper ballot," Ahmed said. "And that paper ballot is also very difficult. Can you imagine how many seniors couldn't understand the instructions? Don't have anyone to drive them to vote? To either correct the ballot or vote in person? My dad is lucky to have me help him, but there is nobody like that, doing that for seniors. I worry about that."

"What we've seen is people that received letters from us or from the early voting ballot board indicating that there was a missing ID on their ballots, then they go into the polling locations and have to go through a whole process to cancel their mail-in ballot or potentially vote a provisional ballot and that, of course, slows things down at the polling location," Stevens said.

A representative with Woori Juntos told ABC13 the changes due to SB1 significantly impacted the Korean-American community, with a limited amount of interpreters available or people who were approved to help voters in need inside the polling locations.

Dr. Annie Johnson-Benifield, president of the League of Women Voters of Houston, said the organization received roughly 900 calls to its hotline with the majority of the callers asking where the closest polling location was and what to do after their mail-in ballot was rejected.

"For the next election," Johnson-Benifield said. "Since this was a trial run, that maybe for the runoff and subsequently for the November election those problems would actually be cured and there will not be as many. I think a lot of voter education is required so voters will know what exactly is required about the new processes associated with SB1."

Brandon Rottinghaus, a political science professor at the University of Houston said a study conducted in one of his classes revealed during the 2020 elections, most counties failed to effectively alert voters about major changes. He said this year, it's paramount that voters educate themselves and that counties and election officials find ways to make the information readily and easily assessable for folks.

"Republican voting was about on pace with where the percentage of the primary elector is," Rottinghaus said referring to the available data for 2022 mid-term election. "But Democratic voting was a little bit lower. So we take from that, that the Democratic enthusiasm was a little bit lower. It's also the case that SB1 has created some voting hurdles and those hurdles affect the Democrats it seems more significant than it has affected Republicans."