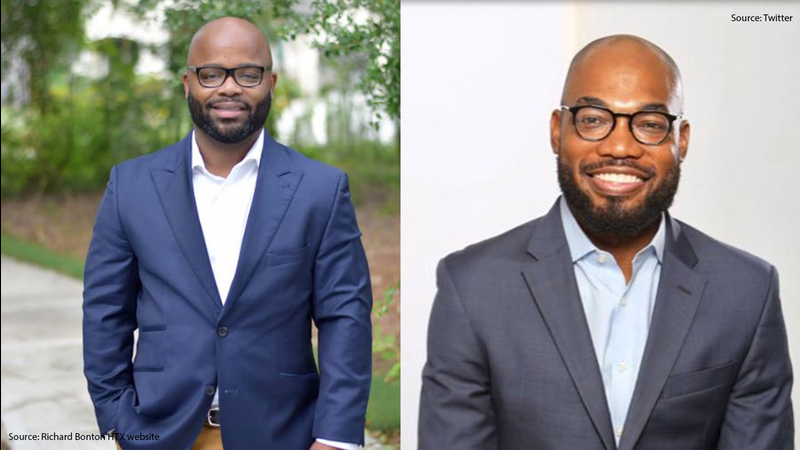 The indictments involve races for Texas House Districts 132 and 142.

Richard Bonton and Natasha Demming were indicted Friday on charges related to the House District 142 race against State Rep. Harold Dutton. In a story first reported by ABC13 months ago, prosecutors say candidate Bonton tried to increase his chances of winning the primary by recruiting Demming. They allege that Bonton helped Demming file for candidacy under a false name, Natasha Ruiz. Ruiz received 20 percent of the vote on Election Day, more than Bonton, and forced Dutton into a runoff.

"Those who have the responsibility and run for the job of making our laws must follow our laws." Harris County District Attorney Kim Ogg details the charges of election fraud and threat that surround two of the Texas House of Representative elections in 2020.

Investigators believe Demming conspired with Bonton to file for candidacy under a false name. Bonton is charged with felony tampering with a governmental record and two Class A misdemeanors.

"Richard Bonton filed numerous election documents on behalf of Natasha Ruiz," said Ogg. "And intentionally obscuring his own involvement in putting up a straw candidate."

"This was a fire we had to put out immediately," said Rep. Harold Dutton after the indictments were announced. "Everyone in elected office recognize that this was perhaps the most egregious offense in the race. Just like it affected me, it could affect them next time."

In what appears to be a separate attempt to impact an election, Damien Jones, a Democratic consultant, is accused of sending threatening text messages to State Rep. Gina Calanni of District 132.

Jones sent text messages in an attempt to convince Calanni to resign instead of running for re-election, according to Ogg. The threat was made on Dec. 2, 2019, just days before the 2020 election filing deadline, Ogg said.

"It's not TV justice you get in real life," said Ogg, who has faced some criticism from the Harris County Democratic delegation, who were getting antsy to see charges filed. "It takes a while. Everything you to gather, the evidence, tying people together, search warrants."

"I was home alone, and I got this threat from this number I didn't know, and it was disturbing," said Rep Gina Calanni Friday afternoon. "I contacted Texas Rangers and the investigation began."

Calanni says the Rangers kept her updated on the investigation, and she understands this was a time consuming process. "I think the results in the indictments should give people more a sense of security that our law enforcement and our district attorney's office are going to find the answers they need and prosecute individuals that have had criminal activity."

Jones is charged with coercion of a public servant and false caller ID information display, both Class A misdemeanors. He could face up to a year in jail and a $4,000 fine if convicted.

"Those indicted today crossed the line from dirty politics to criminal activity and they will pay the price," Ogg said.

Friday afternoon, an attorney for Jones issued a statement, calling the charges "fraudulent and laughable."

"What Kim Ogg did today is public corruption at its finest and we will work with federal authorities to bring justice," said attorney Oliver Jason Brown, who is representing Jones.