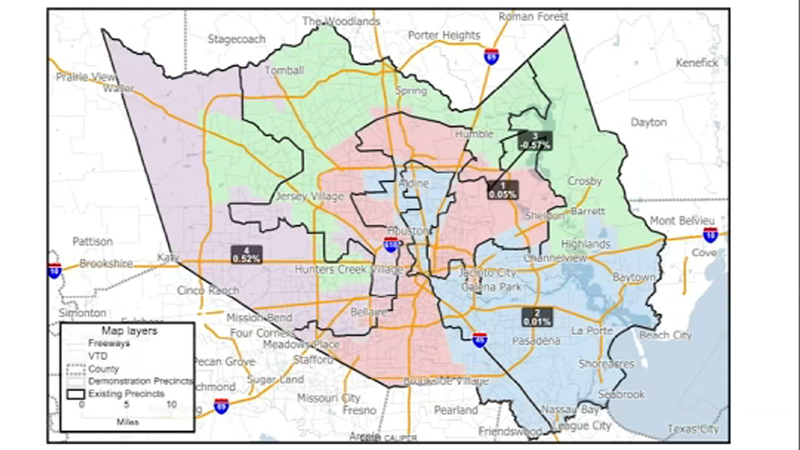 Radack retired from the court a year ago. But he, again, engaged with the county as the plaintiff in a lawsuit that accuses the commission and Judge Lina Hidalgo of not following the law. The suit alleges the commission did not properly publicly post the meeting at which the Democratic majority voted to change the county's precinct map based on the new census.

"It's so significant when you deal with people's right to vote," Radack said. "For the last three years, these three Democratic members of the court have played 'loosey goosey' with the Open Meetings Act and it's going to catch up with them this time."

SEE ALSO: Lawsuit could be next in fight against redrawn Galveston Co. precinct lines

The county attorney's office, however, said the suit is meritless.

"There's a lot of case law that says what has to be in those notices, and we followed it to a T," said First Assistant County Attorney Jonathan Fombonne. "There's no question that anyone was confused about what the purpose of the meeting was."

Precinct 1 Commissioner Rodney Ellis drew the map, which does benefit the Democratic majority on the commissioner's court and would make it more difficult for Republicans to win in any of the five precincts.

"I'm confident we did everything that we were advised to do," Ellis said.

He has not seen the suit but believes they gave the public plenty of notice.

Commissioner Jack Cagle, a Republican, disagrees and supports the lawsuit. His district was markedly changed in the new map and it threatens his seat.

If Radack were to win his suit, it could invalidate the new map, though the county attorney's office is confident commissioners followed the law.