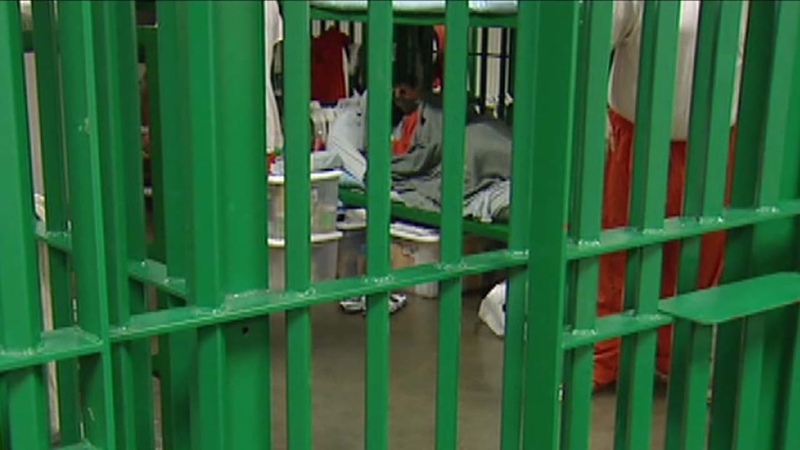 HOUSTON, Texas -- A new report examining the impact of recent changes to bail practices in Harris County found that releasing more misdemeanor defendants from jail without requiring cash bail did not lead to an increase in arrests for reoffending.

The findings are being cited as a win by criminal justice reform advocates who have long argued that cash-bail requirements unfairly penalize poor defendants who can't afford release from jail before trial.

Wednesday's report was the first by independent monitors appointed by a federal judge as part of a settlement order in a lengthy lawsuit that led to changes in the bail system in Texas' most populous county. Civil rights groups have noted the case as the first to put America's cash bail system on trial in federal court.

"This misdemeanor bail reform is working as intended, and there are real results," said Brandon Garrett, a law professor at Duke University and independent monitor of the reforms. "Many more people are released promptly, cash bond amounts are vastly reduced except in cases where there will be public safety concerns ... [and] there has been no change in reoffending."

Changes to the popular cash-bail system - in which defendants can pay for their release from jail before trial either by paying the total, reimbursable amount to the court or a nonrefundable percentage to a bail bonds company - have long been opposed by some law enforcement officials and conservatives who argue that defendants who are freed on bond before a conviction could commit new crimes while awaiting trial.

The report found the rate of new criminal complaints filed against misdemeanor defendants in Harris County within a year of their initial arrest had not changed since the reforms were implemented in early 2019.

The report also found the gap between white and Black defendants being released before trial narrowed under the county's new system. Before the lawsuit, white people were more likely to bond out of jail before trial than Black people. Data on Hispanic defendants is unavailable.

Not included in the report is data on how often the defendants who were released without payment failed to show up at court hearings. Bail reform opponents across the country have used rises in missed court appearances as ammunition against releasing people on no-cash bonds. The report said appearance rates and reasons for missed hearings will be considered in future reports.

As litigation and legislation to change bail systems began to spread across the country as a criminal justice reform staple, Harris County became entrenched in a federal lawsuit over its misdemeanor bail practices for years. In 2016, civil rights groups sued on behalf of several people kept in jail for days because they could not afford to pay the bail amount set for their release. The first-named plaintiff is a woman kept in jail on suspicion of driving with a suspended license because she could not afford the $2,500 bail set for her case - likely a $250 fee if she went through a bail bonds company.

The lawsuit argued that the county's largely cash-based bail system was unconstitutional, since a poor person could be stuck in jail before trial while another defendant facing the same charges with the same criminal history could walk free if they had access to cash. In 2017, a federal judge in Houston agreed, slamming the county for its practices and ordering the release of almost all misdemeanor defendants from jail within 24 hours of arrest, regardless of their ability to pay. The more conservative appeals court later walked back that ruling and called instead for bail hearings within two days of arrest where defendants can argue for lower or no-cash bonds.

Then in 2018, local elections swept out the mostly Republican judges who presided over misdemeanor cases and had been fighting the lawsuit, and replaced them with Democrats. In January 2019, the new judges drastically changed county policies, allowing the large majority of misdemeanor defendants to qualify for automatic jail release on no-cash bonds - where defendants promise to arrive at court or they could later have to pay. Only those arrested for violating bonds, repeat drunken driving or some family violence offenses would need to first appear before a court official before release decisions could be made.

In July, county commissioners agreed to settle the lawsuit and submitted to the judge the already-implemented changes to bail decisions - as well as other changes like reminding people of their court appearances and allowing defendants to reschedule. The judge approved the settlement in November, and independent experts were appointed in March to monitor the system for seven years.

As other bail reform lawsuits and legislation target felony cases, some opponents fear the increased releases will free people who would then commit more crimes.

Police officials and union leaders have recently pointed to people released from jail before trial on felony-level charges who then are suspected of committing new violent crimes, including murder. By Wednesday afternoon, Houston Police Chief Art Acevedo and Houston Police Officers' Union President Joe Gamaldi did not respond to questions asked Tuesday about the report.

Harris County's new bail system only targets misdemeanor crimes, where the longest sentence possible if convicted is a year. Harris County also allows inmates with good conduct to trim two-thirds of their sentence, meaning they could be released in four months on a year sentence. Garrett said the fear of people released committing new crimes is common among changing bail systems but that the data so far doesn't support it.

"Those fears haven't come to pass in other jurisdictions as well," he said. "Sometimes people point to particular anecdotes. ... Anecdotes can be powerful, but they can also be quite misleading."

A spokesperson for the Harris County district attorney's office seemingly took issue with the report's methodology behind the finding that recidivism had not increased, noting it did not look specifically at new crimes committed by people out of jail on bond.

"As they note in their report ... they lack adequate data to examine the effectiveness of supervision of individuals released on bond, and that they intend to return to this in their next report on their ongoing analysis," said spokesperson Dane Schiller.

The monitors said in the report that their data tracked new crimes committed within a year by all people charged with a misdemeanor, including those released from jail because they were not guilty or if they were convicted and had already served their time or were on probation.

Judge Darrell Jordan, who presides over a Harris County misdemeanor court and has advocated for the changes, said the new report brings evidence against reform opposition.

"What the report shows is that everything the naysayers are saying was fear mongering," he said. "Money doesn't make people safer."

Still unaddressed in the report is the concern that people released automatically will not show up for court appearances. Bail bond companies note that they keep track of their clients to ensure court appearances, and those who pay the total cash bond amount upfront will only be reimbursed if they show up to court. Garrett said the monitors don't have the data on appearances yet, and it will be a major topic for future reporting. Jordan said a large majority of people in his courtroom show up for hearings.

Sandra Guerra Thompson, the deputy court monitor and a professor at the University of Houston Law Center, said more practices are still being implemented - partially delayed by the pandemic - to help increase court appearances. They include giving paperwork in both Spanish and English to those being released that details the next steps in their proceedings and sending text-message reminders. Jordan said a website is being built to allow people to reschedule their court appearances online.

"Setting people up for success in terms of their legal obligations is an important part of the consent decree," Guerra Thompson said, referencing the order that followed the settlement.

The report highlighted less concrete changes in the system as well. Before, bond decisions were made in a matter of seconds based on a preset schedule; now, those who don't qualify for automatic release have hearings that last several minutes, with a public defender present, according to the report.

"I hope that people around the state and around the country will take a look at this report and study it and see that they can make a difference in their community, one that is better for the taxpayers and better as far as it relates to safety," Jordan said.