Hannah rushed to hospital, lashes out about pity roses on 'The Bachelorette' 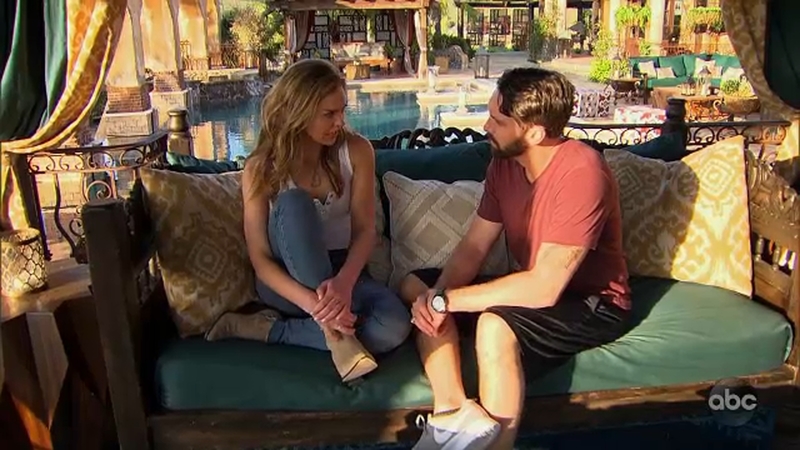 NEW YORK -- This week one man completely self destructs when his plan to win Hannah's heart backfires, while another just goes too far. Hannah finds herself having to be brutally honest in some cases. However, while some relationships hit snags, others started to take flight.

The date card was for Jonathan, Matteo, John Paul Jones, Kevin, Jed, Tyler C., Mike, Cam and said, "Let's push our love to the limit." This date was a "Bachelorette" first! Hannah met the men at a center where they would pretend to have babies. Jason Biggs and his wife Jenny Mollen were pretending give birth as they walked in the room. They put the guys through an anatomy class, wearing pregnant bellies, learning how to care for a baby by using robot dolls, they put clothes pins on their nipples to emulate the pain of breastfeeding, and of course, they had them experience contractions! They strapped on some labor simulation probes and the men all agreed it was amazingly painful. Jed and Hannah had a real connection during their simulation, although John Paul Jones was the funniest.

JPJ, I truly felt your pain. That was not part of the date. But it’s okay. #TheBachelorette pic.twitter.com/wYNroPvWUd

During the cocktail portion of the date, Hannah built upon her relationship with Jed and they even threw a chicken nugget off the roof. Meantime, Mr. Chicken Nugget, Cam, was confronted for playing dirty by the guys on the group date. They urged him to play by the rules. Mike revealed to Hannah that he and his ex-girlfriend had gotten pregnant and he was ready to get engaged, but they lost the baby in the second trimester and the group date reminded him of that experience. He said he felt as though he wasn't there for his ex and he wants to be a better man now. Cam tried to interrupt their moment, but Mike started to get teared up talking about it. Cam would not leave! Mike told Hannah that she gives him hope and then laid a big kiss on her. Cam interrupted them like three times and the third time Mike kissed Hannah in front of Cam. You can watch the uncomfortable moments above.

So what was so important that Cam just couldn't wait to tell Hannah? He resigned from his job to be on the show and he doesn't want the other guys to get in the way. Oh boo hoo. So many people leave their jobs to be on the show. Cue Jonathan walking in and saying "it's ok" and "it's about that time" and "what goes around comes around" to Cam. Yikes, the tension is high! Cam complained to John Paul Jones who listened but then happily sat and ate chicken nuggets. As the guys sat around Cam just stared at Jonathan and they shared a few words. Meantime, Tyler C. spent his time wisely talking about how much he appreciated his mother and why he's attracted to Hannah. He said, "I want to feel the fire." He is awesome. In the end, the date rose went to Mike.

1-on-1 Date
Connor, "Let's set sail on our love story." But that date never happened! After a commercial break, we came back to see that Hannah was hospitalized and was getting anti-nausea medicine. She had passed out in the morning for some reason. She sent Connor a note saying she didn't feel well and invited him over to visit her at her hotel room. He brought over chicken noodle soup, flowers and a card. He told her to read the card later but Hannah insisted on reading it right away. Connor told her how his mom had a stroke while she was skiing and how scary it was because he was just 13. He said that he learned how strong his parents' relationship is and why it's so special. Connor left post-its all over her hotel as he left so that she could remember their wonderful time cuddling together. Hannah didn't hand out a date rose just yet, but oh my goodness did she love finding those notes!

A chauffeur showed up and asked Connor to get ready in 15 minutes for another date! She met Connor outside and asked if he would accept the date rose, which he did! Then they walked into a private concert by Lukas Graham. He sang "When You Love Someone." It was a perfect moment for a kiss and they did. Connor feels like he's falling in love, although he didn't tell her yet.

Sidenote: Tyler G. was forced to leave the show. They did not say why, but if you google, you'll figure it out.

2nd Group Date
Eight men got a date card that said, "A picture is worth a thousand words." There was a photoshoot set up and Franco the photographer said that he had top models to pair with them. The models were dogs and farm animals. So they decided to tie the photoshoot into "The Secret Life of Pets 2." Demi was back to spy on the guys when Hannah isn't around and how they behave with the makeup artist and the animal handler, who were both attractive women. All of the guys passed the "Secret Life" test! During the photo session, Hannah kissed Peter and it made Luke P. super uncomfortable. He followed her to her dressing room and she told him "Let's just talk tonight."

Hannah is starting to feel smothered. She was honest with Luke P. and told him that his confidence in their relationship was irritating to her. She told him that he was being too cocky. He decided to act like the conversation never happened, which was a wrong decision. He went back a second time, yet Hannah continued to talk to other men. He even tried to jump in front of Peter's time, but she told Luke he needed to wait because she wanted to call her own shots. Peter revealed to Hannah that his mom was Miss Illinois! That would be a great hometown date. His dad is a pilot and his mom is a flight attendant, and she knew from Peter's dad's butt that he was the man she was going to marry. How hilarious is that? Hannah and Peter had an adorable conversation and did a lot of passionate kissing. Their connection really grew. She picked up the group date rose and asked Luke P. to talk and she told him he needs to respect her other relationships and work to fix things, and he said he would. But, she decided to give Peter the date rose.

Tailgating Party
Chris Harrison announced to the guys that they would be having a tailgating party with Hannah instead of a cocktail party. Cam asked the guys if he could talk to Hannah about something serious in his life right at the start of it. He said that she might decide to send him home but he wanted the guys to know that he liked getting to know them. Mike yelled out "BS, there are no rules of engagement." But Cam got his time! He told Hannah that in 2014 he was getting off work and he was told he needed to get his leg amputated, then he found out that his grandma died, but it looks like he still has his leg. So that's weird. Mike said that Cam told her his sad story on purpose and wanted a pity rose. Not sure if it was a good move for him to use his time to talk about Cam. But, Hannah pulled Cam aside to talk and told him what Mike had said. Cam said he would never compromise what he has been through for a pity rose. She told him she needed to think about everything.

Cam, Joey, and Jonathan got cut. Now we don't have to hear A-B-C Always be Cam anymore! Cam gave her a nice goodbye and wished her luck. He said that he had the best of intentions and he hates that his integrity was questioned. Next week, the guys turn on Luke P. and he's their next target.
Report a correction or typo
Related topics:
arts & entertainmenthannah brownthe bacheloretteabccominguproseschris harrisonbachelorette
Copyright © 2022 KTRK-TV. All Rights Reserved.
COMINGUPROSES
Houston gets extra 'rose' after paying $240k to bring Bachelor to town
Clayton and Susie 'never say never' to a future 'Bachelor' appearance
Clayton's journey ends with an unexpected twist on 'The Bachelor'
Rachel and Gabby will both be 'Bachelorettes' on the same season
TOP STORIES
Houston gets extra 'rose' after paying $240k to bring Bachelor to town
Driver in Highway 249 road rage incident speaks out
Something strange is happening with our universe: NASA
Rain chances continue into the work week
Texas woman sought in fatal shooting of pro cyclist: US Marshals
Man's body found 6 miles from separate shooting call in NW Houston
Deputy hit while working accident during Jeep weekend, sheriff says
Show More
Alcohol and storms contributed to deadly crash in Asiatown, HPD says
At least 12 displaced after SW Houston apartment fire, HFD says
78,000 pounds of infant formula arrives in US
Man shot on apartment balcony; same apartment shot up earlier: HPD
Houston launches guaranteed income pilot program
More TOP STORIES News