'I'M A FREE MAN': Pup found with pellets in his neck released from hospital 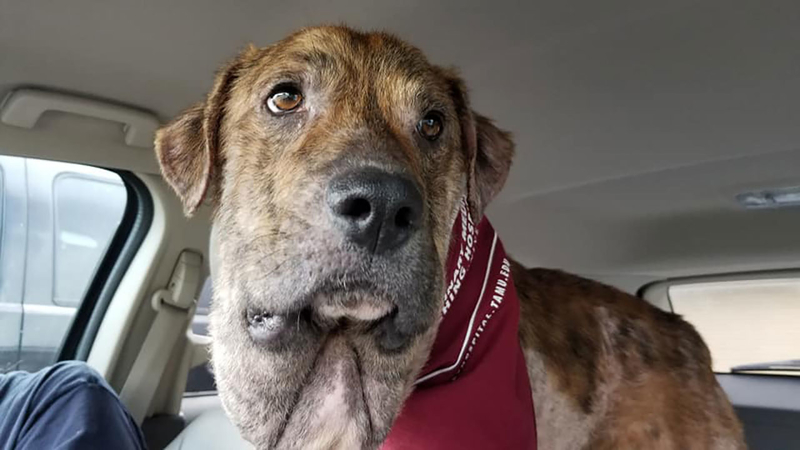 HOUSTON, Texas (KTRK) -- A severely injured dog is receiving the sympathy and support of many after a rescue video has gone viral.

Thanks to a Facebook post by a woman named Laura Jean, Gus was rescued Wednesday in the Sunnyside area on MLK Boulevard.

The dog was found with pellets in his neck, as well as a shoestring that cut through his flesh.


Rescuers then took him to an animal hospital in the Spring Branch area called Vergi 24/7.

"The vet couldn't believe how many pellets he had in his body. Mostly on the right side," Anna Barbosa, a rescuer, said.

"Dead dog walking," a woman named Laura Jean said in a Facebook post. "He wouldn't come to me and I was only pushing him into traffic."
Due to having such severe wounds and complications, Gus was referred to the Texas A&M Small Animal Clinic to see a soft tissue specialist.

The dog had surgery to remove the scar tissue near his jugular vein and carotid artery. He will have to go through another one.

"He is resting. He isn't out of the woods and this next surgery will be the most delicate and worrisome. They revised the scar tissue on about two-thirds of the circumference of his neck. They will go back and work on the tissue around his vital veins and arteries," Barbosa told Eyewitness News.


Gus is recovering well after his third surgery, which was the most critical, Barbosa told ABC13.

Barbosa said the staff at the Texas A&M clinic took Gus' excess skin from his neck and pulled it over the wound.

He is doing laser surgery treatment to reduce the leftover swelling in his face, but they believe he will make a full recovery.

In a post published by Houston K-911 rescue, Gus has been released from the hospital and found a foster mom.

According to the post, Gus' new foster mom, Marina Harrison, was looking after him while he was under the hospital's care.