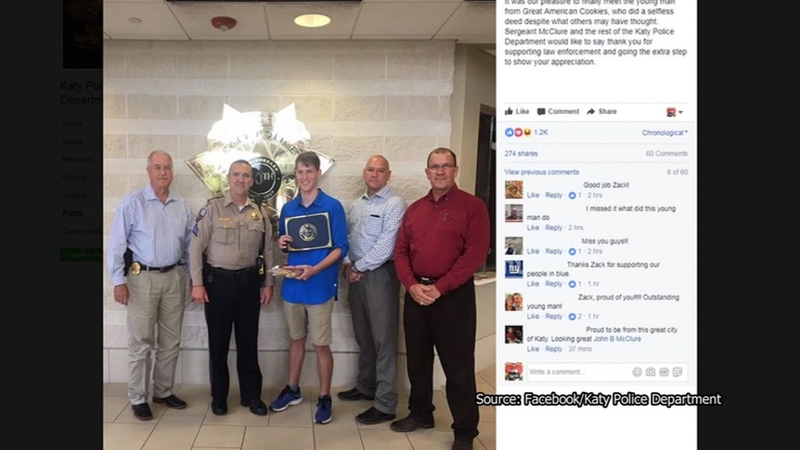 KATY, Texas (KTRK) -- A police department is recognizing a teen whose suspension after buying an officer a brownie at his job at Great American Cookie Co. drew outrage and support around the country.

Katy police posted on Facebook Wednesday its commendation of 18-year-old Zachary Randolph who was pictured with members of the department.

In the post, Katy Police Department said, "It was our pleasure to finally meet the young man from Great American Cookies, who did a selfless deed despite what others may have thought."

The deed that the department referenced came from a Facebook post by Randolph's mother. Earlier this month, the teen's mom said her son was on the verge of termination from his job after buying a brownie for an officer at the cookie stand inside Katy Mills Mall.

The post continued, "The next family walked up and said 'are you going to buy mine too?' My son replied with 'I'm sorry I bought his because he is wearing a badge.'"

The family verbally attacked Randolph and accused him of racism, according to the post. They also said threatened to have him fired.

After the incident, his mom says his "upper managers" wanted to terminate him after learning of the incident. He was instead suspended for a week.

The post drew strong opinion from thousands of users who supported the teen's actions and condemned the store for even considering firing him.

Eventually, the Katy Mills franchise lifted the suspension and made assurances of better management training in similar situations. Randolph will also be paid for the work he missed during the suspension.