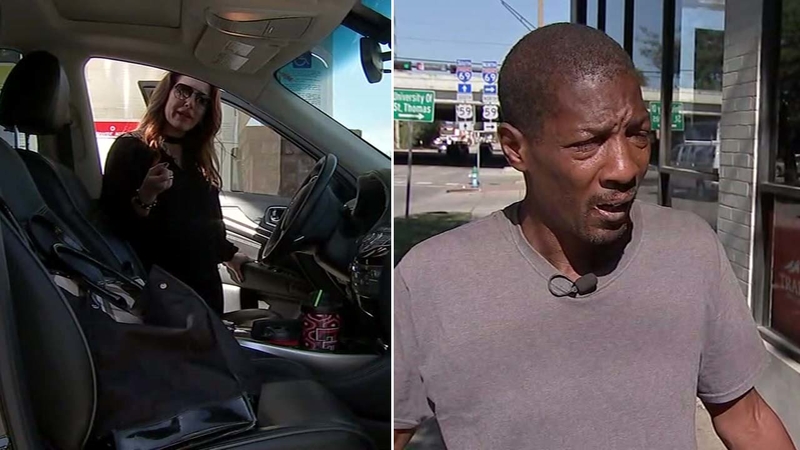 HOUSTON, Texas (KTRK) -- A Houston woman is counting her blessings after a good Samaritan returned her purse that was stolen from a gas station.

Christal Rowe said she was pumping gas at the Exxon on Bissonnet Street and Kirby Avenue when the incident happened. She left her designer purse and work bag on the passenger seat.

Seconds later, it was stolen.

"What I saw was my passenger door closing and he jumped into the back of the car," Rowe said.

Woman reunited with stolen purse after good Samaritan returns it.

An hour later, she received a call from Keith Lucas who told her he had found the stolen bags near Highway 59 and Shepherd Drive.

"It was literally right here. The black bag was on this side and the other purse was upside down right here," he said.

Lucas, who recently lost his job, said he believes in doing the right thing. He and his girlfriend found Rowe's business card inside the purse and gave her a call.

When they returned the purse, everything was still intact.

"It was really sweet. You don't think about that. That someone is going to do the right thing automatically. He could have sold the purses for cash, you know. He saved me a huge headache and it's just come full circle to something really great," Rowe said.

Rowe believes she may have been a victim of what authorities call "jugging" and "sliding."

Before pumping gas at Exxon, Rowe said she was at the Chase Bank and noticed the same car.

Houston police recommends to always lock your doors at the pump, and if you get in trouble, use your vehicle's horn to signal for help.

"These people don't want attention brought to them, so if you sit there and you lay on your horn, it's going to bring nothing but attention," HPD's Jeff Brieden said." I think that's your best bet as far as getting them to get away from that scenario as fast as possible."

Rowe said she has learned her lesson and plans to lock her doors in the future.

As far as the good Samaritan, Lucas told ABC13 that he would do it all over again.

Since this story first aired, generous viewers have created a GoFundMe page for Lucas.

The page has raised more than $6,000 for Lucas in just two days.