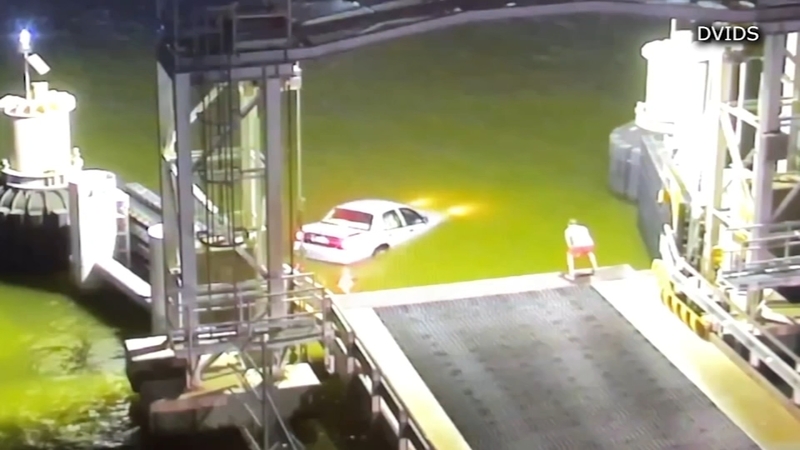 PORT OF HOUSTON, Texas (KTRK) -- A Bellaire man was honored by the U.S. Coast Guard for rescuing a driver whose car plunged off the Lynchburg Ferry ramp on New Year's Eve, 2021.

The shocking incident was captured on a surveillance video that was just publicly released.

Robert "Cody" Moore was going to eat with his family and friends at the Monument Inn when the car came whizzing by.

"We were watching the ships go in and out," said Robert Moore's wife, Karen Moore.

Karen Moore and their five children spoke to ABC13 hours after the award ceremony.

"All of the sudden, this car literally drives off the ferry landing, and it was like a movie," said Karen Moore.

In the video, Robert Moore ran up to the edge of the ramp. He appeared to shout at the driver before he jumped in and swam up to the car. The couple's children, including 11-year-old Levi, were nearby.

"(I was a little worried), but I knew he was going to be okay," said Levi.

Robert Moore told the driver to roll down a window as the car sank. He was able to pull the driver from the water to safety.

The Moores' next-door neighbors, who were having dinner with them, used their shirts as a rope to get the two men onto the ramp.

The driver, in his 60s, suffered minor injuries. The two families went to a nearby gas station, bought some dry shirts, and continued having their New Year's Eve dinner.

"It was kind of a funny thing at the time, and it wasn't until later that the seriousness of it kind of hit him and me," said Karen Moore.

Robert Moore shared details of the incident during the Coast Guard award ceremony.

"Hearing him actually talk about it in front of all these people - it was just really cool," said his daughter Ellen. Karen and Robert Moore's sons, Levi and Mitchell, said they enjoyed visiting the Coast Guard facilities.

They were given a tour, and watched planes take off from Ellington Field.