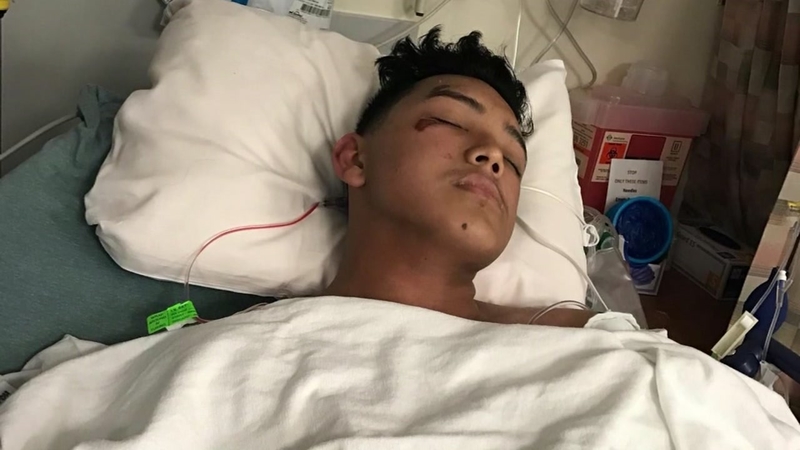 Fabio Perez is recovering after losing a leg in an accident, while trying to help someone.

HOUSTON, Texas (KTRK) -- Fabio Perez is recovering tonight in Ben Taub Hospital. The 19-year-old college student's body is broken, but not his spirit.

"I'm just proud of him," said his stepfather, Luis Dominguez. "That's just the way he always is. He helps with everything."

We spoke to Dominguez outside the hospital where Perez has been since Wednesday night.

That afternoon, the young man had just left the gym and was headed to the library at Lone Star College. As he was driving along Aldine Westfield near FM 1960, Perez saw a stalled car. He immediately got out to help. That decision almost cost him his life.

"He decided to pull over and give him a hand," Dominguez said. "He says it just happened so fast, as soon as he was helping, he opened his eyes, he was pinned between the cars."

Both Perez and the man with the stalled car, Bryant Harts, were injured. Harts spent two days at the hospital. He is now at home recovering with an arm in a sling and a neck brace.

Perez, however, suffered critical injuries. Doctors had to amputate his left leg, and has undergone several surgeries.

The driver, who did stop, has not been charged with any crimes. His family worries the driver who hit Perez may have been distracted, perhaps on the phone. They want others to learn from that.

"He just wants people to be more careful on the road. He told me he couldn't understand why they couldn't see him. It was broad daylight, emergency lights were on, two people pushing a car," Dominguez said.

As the investigation into the crash continues, both Harts and Perez are trying to recover. Perez knows the road ahead will be hard, but his stepfather says this young man is determined to succeed.

"He doesn't want to stop. He wants me to go to school, his school, and get everything situated right now so he can keep studying in the hospital," Dominguez said.