From 1994: Tom Koch finds the woman who was listed first in the phonebook 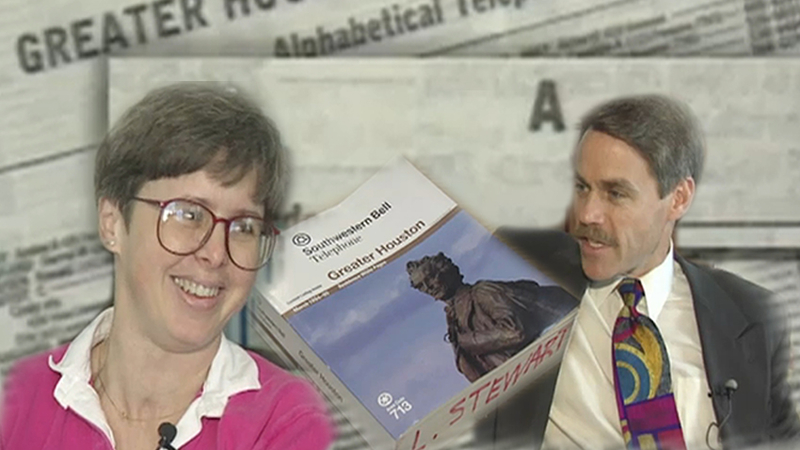 HOUSTON, Texas (KTRK) -- One morning way back in 1994, I was struggling to come up with a story idea.

Someone in the newsroom mentioned a relative who was always called on last because her last name began with Z. I thought, 'Why not do a story on the person always called on first?' The first person in the phone book.

I looked her up, called her and she agreed to an interview. Her name was Andee Aaby, of Norwegian ancestry. When I was finished with the interview, I decided to write the story with all As.

Every word in my story began with A. So, here's the story as it was written in 1994:

"My father was really proud of his Norwegian heritage so he wanted to give all of us kids Norwegian names," Aaby admitted. Adjacent A's accent Aaby's artful appellation and anoint Aaby as an annual anomaly.

"I do mind it when I get crank calls early in the morning, saying 'Hey, did you realize you're the first person in the phone book?'" Aaby asserted.

"I always hated it as a kid," Aaby averred. "I was always first in school, always first seat, first row. I'd like to say, 'Could we go to reverse alphabetical order please?'"

"I just got used to it," Aaby articulated.

And always appreciates an accidental achievement.

"I've been first in Pittsburgh, Columbus and Cincinnati," Aaby alleged.

SEE ALSO: ABC13's Tom Koch will anchor his final newscast in May

David and Raheel had a brush with greatness because ABC13 anchor Tom Koch is on the show, and he dropped some gems!