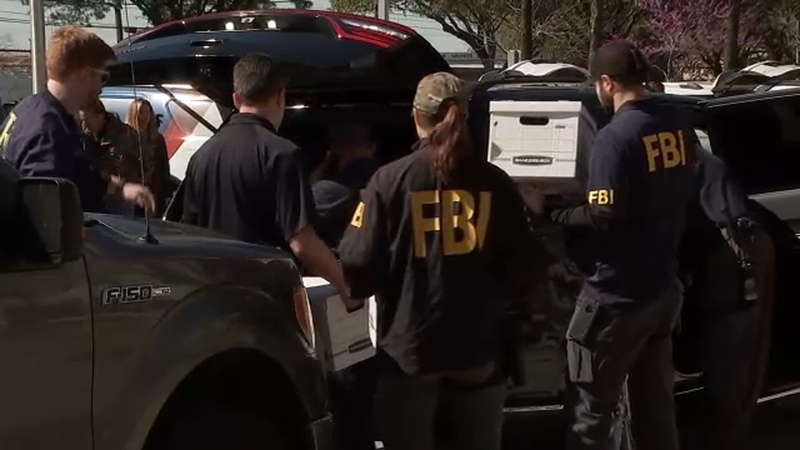 HOUSTON, Texas (KTRK) -- HISD's Chief Operating Officer has been temporarily assigned to home duty after the FBI conducted an investigation at the district's main office.

Later that day, Officer Brian Busby was reassigned by Grenita Lathan, the interim superintendent of schools.

Busby is now required to work from home during regular business hours. He will be paid, and he must be available to receive assignments by phone within the hour.

In his role, Busby oversees an annual operating budget of more than $260 million and leads a workforce of more than 7,000 employees from seven major departments, including construction, transportation, nutrition, police, facilities, support and strategic engagement and outreach.

Agents were at the Hattie Mae White Educational Support Center since just before 8 a.m. on Feb. 27.

During the investigation, authorities were spotted walking out of the HISD building with three large boxes and an Apple Mac computer monitor.

The FBI referred to it as a "court authorized law enforcement matter."

The FBI released this brief statement:

"The FBI is conducting court authorized law enforcement activity at the Hattie Mae White, HISD Administration Building. We want to assure the public there is no danger to the HISD students, staff or greater Houston community. We will provide any additional information once it becomes public. We have no further comment at this time."

HISD SILENCE: Citizens are allowed to speak at @HoustonISD mtgs, so I did. I asked trustees & @HISDSupe if after a week of silence following an @fbi search they could assure Houston the the district and your $ is safe. I got silent stares back & that is the only answer you get. pic.twitter.com/sdBGSSpEK6

HISD released the following statement on the matter:

HISD can confirm that the FBI is in the Hattie Mae White Educational Support Center this morning regarding a court authorized law enforcement matter. The district is fully cooperating. There is no danger to students, staff or the community.

HISD has been under scrutiny for months after the Texas Education Agency took control of the state's largest school district in November 2019.

The TEA's investigative unit issued a 318-page report in October 2019, outlining allegations, including that HISD's Board of Trustees violated contract procurement rules and attempted to tamper with contracts, among other things.

It is unclear if the issues from the TEA's investigation are related to Thursday morning's FBI activity at the district's administration building. ABC13 has reached out to the TEA.

"Government contracts are easily susceptible to fraud and therefore contract procurement rules should be followed accordingly," the TEA said in its October 2019 report. "However, HISD manipulated contract procurement rules through the abuse of Job Order Contracts and multiple change orders."
Following months of investigation, the TEA determined one of the ways the district abused the procurement process was by splitting job contract orders to make sure the contracts were valued under $500,000 and could then avoid getting prior school board approval.