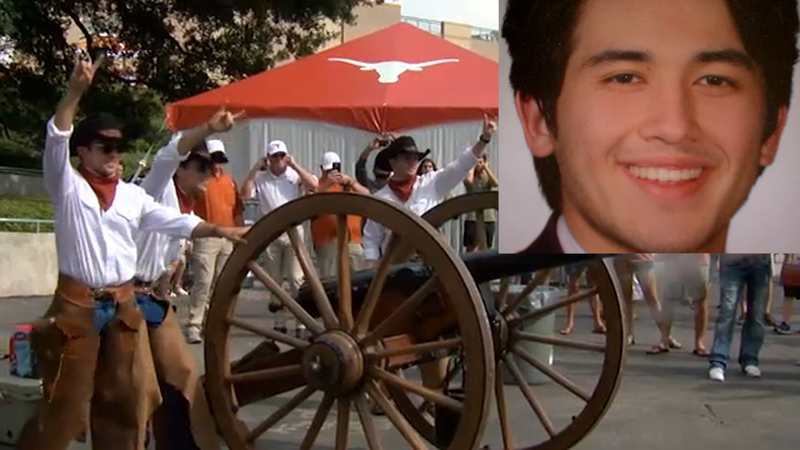 His bed is still neatly made with a stuffed animal resting on six red, white and navy blue pillows.

But it's been more than a year and 20-year-old Nicky Cumberland isn't coming home.

"This is where we come to cry," his father Shawn Cumberland, of Houston, told 13 Investigates as he stood in his son's room. "(My wife) writes entries in here every once and a while, just a note to him."

Nicky was a passenger on the way back to the University of Texas from an off-campus UT Cowboys ranch initiation weekend in September 2018 when he was in a car accident.

The Cumberlands told 13 Investigates they insisted the university open an investigation into the Texas Cowboys, the UT student group best known for firing Smokey the Cannon after the Longhorns score at home football games.

That investigation found hazing, harmful behavior and alcohol misconduct, all cited in a report backed up by more than 700 pages in an investigative file. One new member was coerced into "biting the head off a live hamster." Others were hit with a wooden stick or forced to consume large amounts of alcohol or "ingest unwanted substances, including chugging a gallon of milk, cat food, Spam, Tabasco sauce, minced garlic and whole onions."

The Texas Cowboys student group was suspended for six years due to hazing, but that hasn't stopped the alumni group from operating.

About seven months after the suspension, the Texas Cowboys alumni group held a reunion at the Headliners Club on November 8. The following day, game day, they met at the alumni association plaza, just across from the UT football stadium.

"I'm disgusted by them. I'm repulsed by the fact that they would show up for an event like this. It's an insult to, to everybody, but us, the family, in particular," Shawn Cumberland said.

Edward R. Lopez, President of the Texas Cowboys Alumni Association, told 13 Investigates the group operates independently from the university and that the gatherings are important because "alumni are vital to leading the fight against hazing."

"At our recent alumni reunion, we took the occasion to have a robust discussion about how we can better provide guidance to the student organization, specifically talked about the scourge of hazing and how to continue to provide service to The University and our community," Lopez said in a statement. "We believe firmly that an active and engaged alumni organization will help the Texas Cowboys lead the fight against hazing when they return to campus."

Sylvia Cumberland spent every day wishing for a miracle as Nicky laid unconscious in a hospital bed. As the weeks passed, each doctor's visit made her less optimistic.

His mom knew she didn't have much time left with her son. In a final act of love, Cumberland gave him a sponge bath, like she did when he was a baby, one last time.

When she turned him over, she noticed vivid bruises on the back of his thighs.

She was too focused on talking to her son and clearing her mind as she prepared for his death that she didn't give it a second thought.

"It wasn't until after the funeral when we went up and met some of the boys that, you know, one of the boys told us that he was paddled," Shawn Cumberland said. "Then it's just like, 'Wow, that explains it. That's the mark. That's the unusual marks.'"

Their son was the second UT Cowboy to die in a hazing-related death. The first was Gabe Higgins, who died at his Cowboys new member retreat in 1995.

"At the time of the 1995 incident, the Cowboys were already on probation for engaging in hazing activities, including paddling, three times in so many years. After their five-year cancellation, the Cowboys returned to campus in 2000," according to a March 27, 2019 discipline report following the latest incident.

But even with that history and a student in the hospital after an initiation weekend in fall 2018, the university didn't look into his death until Cumberland's mother discovered the bruises and asked for an investigation.

"They didn't self-start an investigation and no Cowboy came forward to say that these incidents occurred," Shawn said.

Combined with strenuous games, underage drinking and late nights, Cumberland believes his son had had enough and was looking for a way out when he got into a car in the middle of the night with other new initiates. It crashed shortly after leaving the ranch.

"Hazing contributed to my son's death because they set up a system that stressed everybody. They did not allow them to have enough sleep and then they let them get into a car," Shawn said.

The school's investigation didn't reveal sleep deprivation, but interviews with about 100 university students, both new and active members, confirmed hazing during the fall 2018 event and in previous years. None of them came forward to report information to the university after Cumberland's death.

There are currently 11 student organizations at UT Texas that have been "disciplined for hazing and/or convicted for hazing, on or off campus, during the preceding three years," according to the university.

The Cowboys' six-year suspension is the longest penalty any student organization faced since UT Dean of Students Dr. Soncia Reagins-Lilly arrived in Austin in 2006.

"With a set of facts, with the history, six years seem to be appropriate to allow us to bring the organization back stronger and better," Reagins-Lilly said.

The conversation surrounding hazing and healthy ways to join student organizations is ongoing, she said. Breaking the tradition of hazing is something universities are dealing with nationally and there's no easy solution.

"It is a matter of educating. It is a matter of continuing to strengthen your policies. It is a matter of, like the Cumberlands, having families who are committed, that are dedicated to helping us educate and to remove this code of silence. So working with families, it starts in high school," Reagins-Lilly said. "You've got to start the conversation much earlier in our households and in our families and also here at an institution we have to talk about it, we have to explore, we have to try new things."

She said the efforts UT has put in place have shown improvement; that the university is making progress.

She also said students can receive amnesty from the university in certain situations. For example, the Alcohol and Drug Medical Amnesty Policy says a "student who seeks emergency medical assistance for him or herself or others for potential drug or alcohol emergencies may not be subject to formal disciplinary action."

In Cumberland's case, Reagins-Lilly said no students came forward to report the hazing that occured that September 2018 weekend at the ranch.

"I do believe our students are engaging and they are more informed and they're more aware, so it was disappointing that they had not used the amnesty policy," she said. "I was devastated and I always am when students engage and treat each other in that way. So there was a disappointment."

The Cowboy's won't be considered for reinstatement until 2022 at the earliest. The Cumberlands are watching them closely. So is Reagins-Lilly and that alumni weekend may not have been the best call.

"Their decisions, their judgment, how they exercise, how they engage, yeah, those are all factors that we will consider," Reagins-Lilly said.

UT's police department still has an active investigation into Cumberland's case and has coordinated with the Texas Department of Public Safety, Texas Alcoholic Beverage Commission and the Travis County Attorney's Office. No criminal charges have been filed.

"We can't discuss ongoing investigations, but in general, police can keep criminal investigations open when there is insufficient evidence to bring charges in the event people come forward with additional evidence," a UT spokesperson said. "The evidentiary threshold for criminal charges is different from a student conduct investigation."

Earlier this year, Sen. Judith Zaffirini, D-Laredo, passed a law that clarified the definition of hazing and the different types of conduct that fall within that definition.

"Hazing is not just a violation of university rules; hazing is a crime. Under the law, a hazing offense can be committed not only by engaging in a hazing activity, but also by soliciting, directing, encouraging, aiding or attempting to aid another in hazing; by intentionally, knowingly or recklessly allowing hazing to occur; or by failing to report, in writing to the Dean of Students or another appropriate official of the institution, first-hand knowledge that a hazing incident is planned or has occurred. The fact that a person consented to or acquiesced to a hazing activity is not a defense to prosecution for hazing under the law."

Even with the new law, Shawn Cumberland said he's still determined to change college hazing culture. His son isn't coming home. He can't bear to think of another family coming home to an empty bedroom, too.

"For the longest time we kept thinking he's just going to drive up the driveway," Shawn Cumberland said. "We would just sort of forget. Mostly it's just that we just miss him so much."

Have a tip for Ted Oberg? A problem to solve? Get in touch with us on our tip page, or send a tip below. (On mobile? You can open our form by tapping here.)
Related topics:
educationaustinhoustonted oberg investigatesuniversity of texastexas newshazing
Copyright © 2021 KTRK-TV. All Rights Reserved.
TED OBERG INVESTIGATES
How residents in this Harris County neighborhood became numb to crime
Mayor Turner drops support for controversial housing deal
Meeting to expose housing director exposes little about housing deal
Turner defends record in face of questions over housing deal
TOP STORIES
Boston-bound jet crashes on takeoff west of Houston with 21 on board
Houston executive 1 of 21 on board jet when it crashed in field
How residents in this Harris County neighborhood became numb to crime
Loved ones remember mom of 3 killed during home invasion
Alvin Community College offers way to tap into oil and gas
Friendswood gas fire put out after more than 5 hours since eruption
Aviation weighs in on what might have gone wrong in plane crash
Show More
Jan. 6 panel votes to hold Steve Bannon in contempt
Big warm up ahead but another cool front in the forecast
Astros vs. Red Sox: Houston ties the series after 9-2 win over Boston
Unsolved: A Life Never Lived
Alvin Community College gives inmates way to earn a second chance
More TOP STORIES News