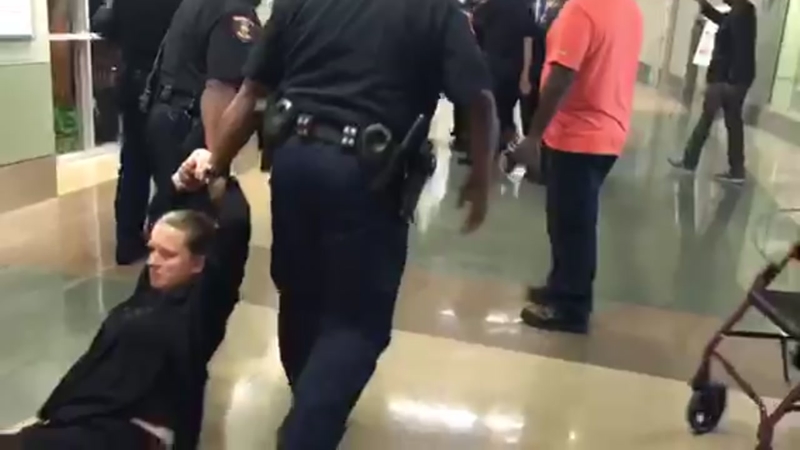 HOUSTON, Texas (KTRK) -- A tension-filled Houston ISD trustees meeting erupted Tuesday night, with at least one person being dragged out.

The board of trustees planned to vote on a proposal that is expected to have a major impact on the future of the school district. The plan, if approved, would hand over control of 10 schools to a charter partner, Energized for STEM Academy.

Late Tuesday night, the board adjourned without a vote on the matter. However, HISD will still need to make a decision by April 30.

After the chaotic night, Houston ISD issued a statement, revealing at least one school district police officer was roughed up during a scuffle with someone attending the meeting:

"Per board policy BED LOCAL, audience members shall not be disruptive or abusive during the board meeting. While the district appreciates and shares the passion the community has for the students and schools and welcomes public input, audience members are expected to be respectful and observe decorum so that their views may be heard and appreciated.

During Tuesday night's workshop, after continuous disruption and multiple outbursts from members of the audience, and after several verbal requests from the Board President to adhere to the rules, attendees were instructed to clear the room and called for a recess. Many refused to leave and a scuffle ensued. An HISD police officer sustained minor injuries."

The Texas Education Agency placed the schools on "improvement required" status for the past five years, and because of that consecutive label, the district must follow a 2015 law passed in the state legislature that states the schools must close or allow the TEA to manage the entire district in order to keep the low performing schools open.

Houston Federation of Teachers President Zeph Capo says a third option, passed by the state legislature in 2017, allows the school district to partner with a private charter organization, giving them control of the struggling schools, while keeping them open and keeping the TEA at bay.

"If there is a partnership approved by the board and if that partnership is then approved by the TEA the district may get a two-year reprieve from the accountability system," explained Capo who does not like the partnership. "It is a Trojan horse vehicle to bring charter schools into the public schools by hook or by crook."

He says while it would be a two-year partnership, HISD would lose control of the 10 schools from budget and management to staffing.

Wheatley High School is on the list. Volunteer Denise Henderson says removing local control of a community school would hurt the neighborhood.

"As much as I would want to think it's a great idea, I just foresee all of the staff who have been here for five, 10, 15, 20 years being fired and I just don't know if that would be the best thing," said Henderson.

Wheatley senior Natalie Cabrales says she's worried her younger brother would end up at a school further away.

"It's not a good idea, because, I mean, they accept a lot of people here and some of the teachers are really good and they help us," said Cabrales.

Capo wants the district to think out of the box and partner with a local university or community college.

"A local, beholding to the public institution that has public safeguards, public responsibility and be the individual that comes in and partners with the school district."

If OK'd, the vote must next be approved by the Texas Education Agency.

Crowd gathers at @HoustonISD school board meeting for vote on giving 10 low performing schools to a private charter to manage. #abc13 pic.twitter.com/l6NDDvI5e3

2 students from Dogan Elem. address @HoustonISD board, “Do not change Dogan because it’s our school!” Begging not give the school to charter pic.twitter.com/BiyirGnkQu

After a more than two hour delay, at least one arrest and the public removed... the @HoustonISD school board meeting is back in session.