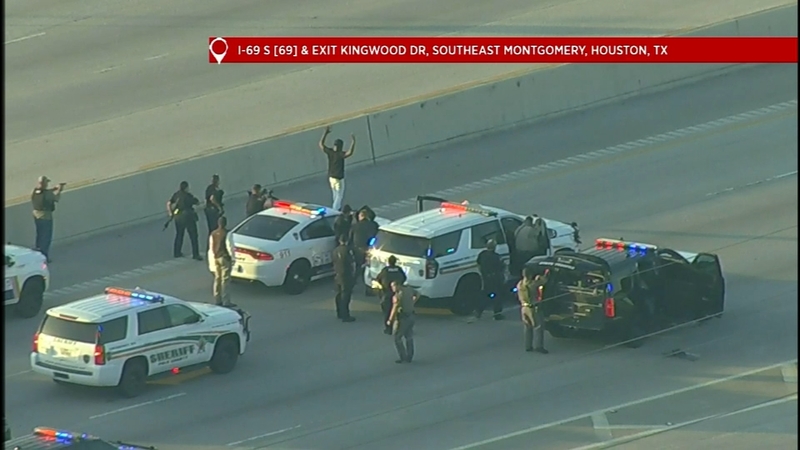 HUMBLE, Texas (KTRK) -- The end of a chase with a casino robbery suspect sparked a standoff on the I-69 Eastex Freeway Friday morning.

According to the Alabama-Coushatta Tribal Police Department, a man attempted a strong-arm robbery inside the Naskila Gaming casino, which is about 17 miles outside of Livingston, just before 6 a.m.

Tribal police responded to the casino in under one minute, the police chief said. When the suspect spotted officers, he took off, sparking a chase.

Multiple agencies, including DPS troopers and Polk County sheriff's deputies, chased the suspect through Montgomery County before the 50-mile pursuit ended on the Eastex Freeway at Kingwood Drive.

DPS troopers tried to take the suspect into custody, but it appeared he would not immediately exit his vehicle, sparking a standoff. All inbound lanes of I-69 were blocked at Kingwood Drive.

Just after 7 a.m., the suspect exited the vehicle, walking backward with his hands in the air.

He was taken into custody without incident. Officials said it was the best possible outcome.

Officials chased the suspect through Montgomery County after a robbery at a casino in Livingston. The suspect eventually exited his vehicle shortly after 7 a.m.

The standoff unfolded live on ABC13's Eyewitness News at 7 a.m. You can watch the clip in the video player above.

SkyEye video showed multiple patrol vehicles lined up behind a white Dodge Charger. Officers had their guns drawn as the suspect got out.

The driver's side front tire of the Charger was blown out.

Troopers did not find any other people inside the Charger.

The Alabama-Coushatta police chief said the suspect actually rammed into two other cars during the chase, but thankfully, no one was hurt. Police believe that is what caused the Charger's tire to blow out.

Detectives were reviewing surveillance video at the casino. An initial investigation did not appear to show the suspect with any weapons, but officials are still reviewing video and taking witness statements.

So far, authorities have not released the name of the suspect. They say the suspect did get away with some property from the casino, but he threw it out of the car during the chase. Police are still working to figure out exactly what was taken.

Police noted that there has never been an incident like this reported at the Naskila casino before.