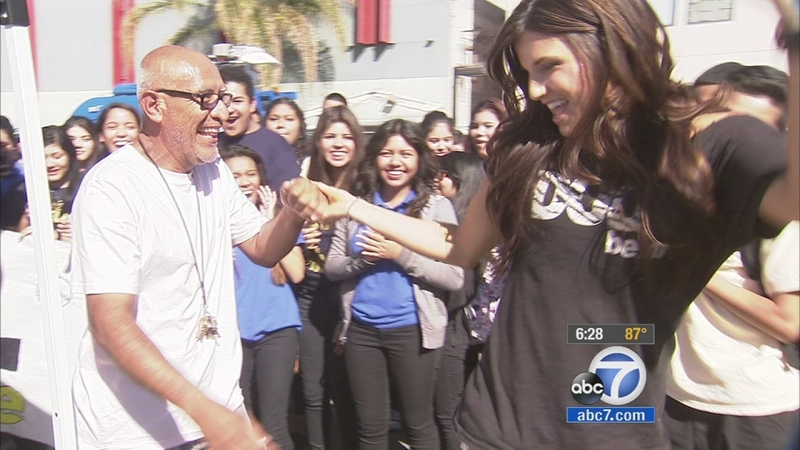 LOS ANGELES -- Alliance Media Arts and Entertainment Design High School is a big name for a small school of just 300 students all planning one big surprise.

The campus was a sea of energy Friday as kids rolled out their signs, lined up in the sun and waited to surprise their high school janitor.

Mr. Wilfredo Burgos, the high school's plant manager, is simply the man these students have come to love and respect.

"Sometimes we put a lot on him leaving our trash out, but he never complains about it, he's always doing it with a smile," another student said.

That smile and attitude really paid off for the longtime Los Angeles Dodgers fan. He was given two Dodgers tickets to Friday's National League Division Series opener.

Brent Camalich is the CEO of DUDEbenice.com, a clothing company with a charitable bent that funded this whole event.

"The DUDE.be nice project is a platform for young people to say thanks to a person in their community in a really fun and creative way, and they said we have the perfect person for you," Camalich said.

Burgos said he "never expected to go to a playoff game."

Burgos isn't the only one on the receiving end. Organizers say all these students are also getting something, a valuable lesson. It's what Camalich calls a "helper's high".

"We want to get kids addicted to this helper's high where they go and do things positive for people, and I think in turn that creates a positive community on campus," Camalich said.

It's a test these kids won't have to study for. As Burgos left early for the Dodger game, the students agreed to finish up his work for the day.