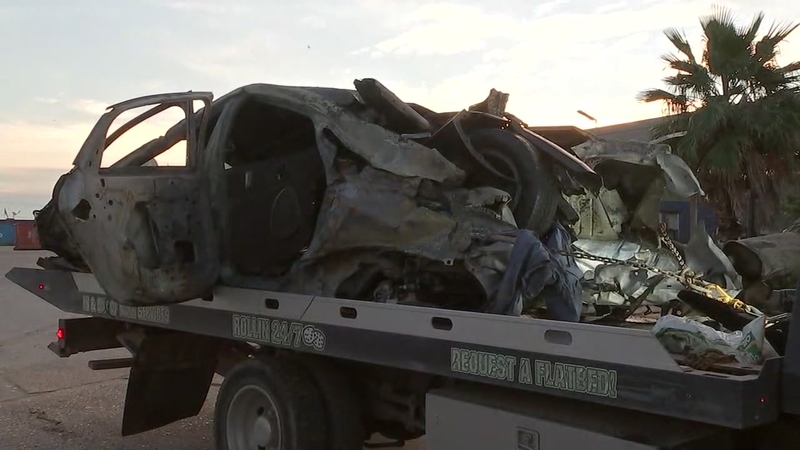 HOUSTON, Texas (KTRK) -- A chase that topped speeds of 100 miles per hour before ending in a deadly crash shut down the eastbound lanes of the East Freeway near Magnolia Ave. for hours Wednesday morning.

The freeway finally reopened around 8:30 a.m.

UPDATE: Feeder road and shoulder of I-10E open to drivers but still slow-going after chase and fiery crash. TxDOT is sweeping now and spreading degreaser for oil spill pic.twitter.com/kaeqCVpNhJ

The Harris County Sheriff's Office says the pursuit started off Thompson and Jones, where a deputy tried to pull over the suspect driving an Impala 42 mph in a 30 mph zone.

The driver never stopped, speeding off to I-10 where he started to go the wrong way. He hit speeds of 103 mph as he went westbound in the eastbound lanes.

The deputy tried to keep up with him as he led them on a chase that lasted about 30 minutes.

By the time officials caught up to the suspect, he had already crashed into a barrier, causing his vehicle to burst into flames.

Authorities believe the vehicle went airborne as it hit the barrier, slamming into an 18-wheeler that ended up going off the side of the road.

The suspect was killed. The driver of the big rig was taken to the hospital for minor injuries.

This truck had to swerve to avoid a driver going 100+ mph in the wrong direction on I-10E! Suspect was trying to run from @HCSOTexas. Now interstate will be closed for hours. Live reports on @abc13houston pic.twitter.com/feltwyfaYw

Officials say the suspect's vehicle and part of the license plate also appears to match that of a vehicle involved in a chase in Baytown on Sunday.