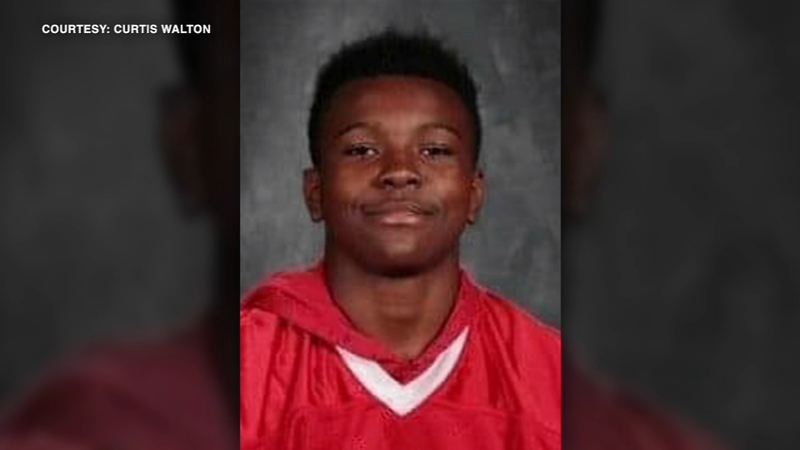 GARY, Indiana -- A 14-year-old football player has died after he was found unresponsive at the bottom of a high school pool Wednesday, the school's superintendent said.

The Lake County Sheriff's Office in Indiana said officers responded to Calumet New Tech High School in unincorporated Gary to a report of a possible drowning.

First responders found freshman Curtis Walton unresponsive in the pool after going through a conditioning drill. According to witnesses, the pool was opened to players after football practice and at some point, the young athlete was discovered at the bottom of the pool.

"They just came in from football practice, you know, it was very hot and humid yesterday and the coach let them go in for to cool off," said Lake Ridge New Tech Schools Superintendent Sharon Johnson-Shirley.

Walton's father posted a message on Facebook, saying, "And although this is something we never thought we would ever have to experience, we still give thanks to God for the time and the memories we were able to have with him."

The school's superintendent said that a coach was watching over the pool and trainers immediately began CPR.

"We had people on guard," Superintendent Johnson-Shirley said. "The coach, as a matter of fact, was in the seat to look over the students and he saw two other students going down to bring this kid up."

Counselors and mental health professionals were on hand at the school Thursday to help students cope.

"It was very sad in school today when I first walked in everyone was crying," said student Kendall Tate.

"It was like very emotional. You could honestly tell that all the hearts were broken and all that," said student Eileen Russell.

"Right now, my attention is on my students and our coaches because they are really, really not doing well this morning and I am not either," Johnson-Shirley said.

"They're probably learning how to deal with death for the first time and so that's why we have that staff available for them," said Laura Hubinger, CFO of Lake Ridge New Tech Schools.

The school is working with detectives to determine a timeline of events and what led up to the death. Surveillance cameras were apparently not working at the time, the superintendent said.

School officials could not say if Walton knew how to swim.

Detectives are still investigating and trying to determine exactly what led up to the incident.
Report a correction or typo
Related topics:
garywater rescuepoolteenu.s. & worldhigh school football
Copyright © 2022 WLS-TV. All Rights Reserved.
TOP STORIES
IRS conducting criminal investigation in Uptown Houston
Woman stabbed to death allegedly by husband was a Katy ISD employee
Northbound I-45 blocked before FM-518 in League City
Here's how many inches of rain you could get over the next 7 days
Investigations resume for parents of trans children, lawyers confirm
Houston gets highlighted as stop in the GMA 'Rise and Shine' tour
Wanted suspect shot and killed by Pasadena police during foot chase
Show More
Police arrest man charged in robbery and kidnapping caught on video
United cancels couple's flight, charges $4K more for same seats
Trump pays $110K fine, but must submit paperwork to end contempt
From Disney+ to Hulu and ABC13, here's what to binge
Chase suspect in stolen SUV crashes into innocent driver: Officials
More TOP STORIES News