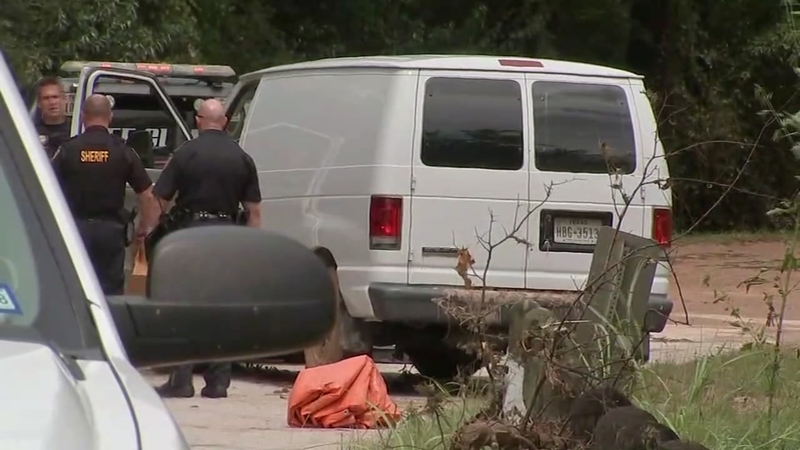 Driver who survived van crash that killed family speaks out

HOUSTON, Texas (KTRK) -- A van accident that killed four children and their great-grandparents was one of Harvey's tragic stories heard around the nation. Many read about it, but it was Sammy Saldivar who lived it.

"I was lucky God was on my side," said Saldivar.

It hasn't been easy. What happened Sunday, Aug. 27 replays in his mind constantly but he wanted to tell his story at the exact place where he lost his parents and four great-nieces and nephews.

Thursday was the first day he had been back to the scene.

"I gotta face it. Gotta come back and face it," he said.

It was a cloudy, rainy day. The rain had gone all night Saturday, and Greens Bayou on Ley Road was going over its bank. Sammy had a plan.

"Go get the van, get the kids, get them out of there. [I] was headed to my brother Ric's house," he said.

Everything seemed fine until he got to the bridge on Green River Drive where the water was rushing fast. Sammy said he wanted to go back, but it was his 84-year-old father, an Air Force veteran, who said they could make it and should keep going.

"But when we crossed that bridge, I thought, 'Yeah the worst part is over,'" he said

However, the water was too powerful. He called 911 and that's when it all began.

"I really didn't notice it was going backwards at the time. I just didn't know it," he said. "Next thing you know, I started going sideways."

The van was sucked into Greens Bayou. Inside were his parents, Manuel and Belia Saldivar, 16-year-old Devy, 14-year-old Dominic, 8-year-old Xavier and 6-year-old Daisy.

"I couldn't see my mom. She was holding my dad. I couldn't see the back of her head. I saw the water come across the front of the dash and it started pouring in my window and my instinct went, 'You can't get out until this van fills up,'" he said.

The water was pouring in, he said, and he went into survival mode, yelling out to the kids to open the back door.

"Then I shimmied out the window," he said. "I had to swim pretty good ways to get up top because I was under there too."

Somehow he was able to latch on to a small tree branch, and that's the moment he realized his family was not going to make it out alive.

"The van was already bobbing like a cork and I could hear the kids in the back. There was nothing [I could do.] I couldn't reach the van. I couldn't do anything," he continued on.

Sammy held on to that branch for at least an hour, hollering, screaming and even crying until by some miracle, he said, first responders found him.

"I can't believe it happened. I was hanging on to a twig," he said.

Three first responders saved him that day, and for that, he is eternally grateful. Still, what happened is so surreal, but he knows time heals all wounds.

"They know I love them, they do. I'd tell them every day," he said.

Relatives of those who died have set up the following accounts to help with the six funeral expenses. You can look for them under the following names: