Doctor uses cooling treatment to save his own life 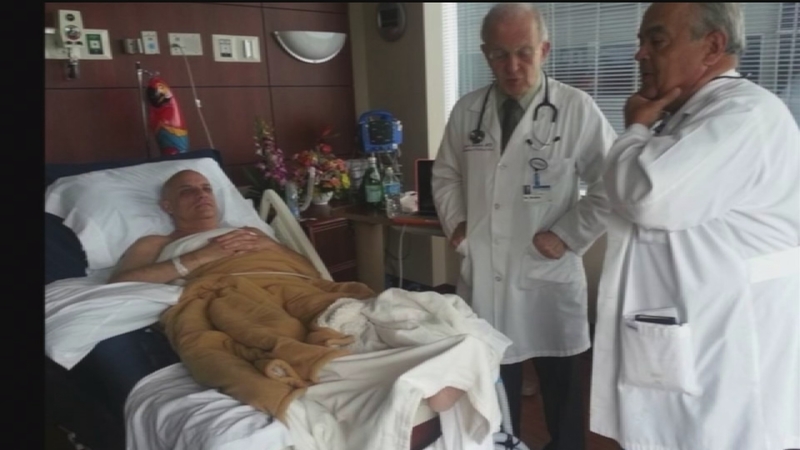 Doctor used his own treatment on himself

HOUSTON (KTRK) -- A Houston doctor who's helped people survive trauma and disease through innovative treatment suddenly found himself in need of critical care. How he helped treat himself may help others.

Dr. Joseph Varon is a well-known doctor who specializes in critical care medicine, caring for patients who are very ill or very injured.

Six months ago Dr. Varon became a patient himself the day he had a stroke. At first, he thought it was an inner ear infection.

"On the MRI of the brain it showed I had an acute stroke," he recalled. "So as a good doctor I argued and said no, no, no, I was moving. This was probably an artifact."

It was not, and the MRI showed part of the brain was already dying from lack of blood. His speech was slurred, he had vision problems, but his mind remained alert. So he did what he has ordered for others. Dr. Varon is also called Dr. Freeze.

"I tried one of my areas of expertise, which is hypothermia," he explained. "I decided to cool my brain."

Over the years he has brought patients back from the brink of death or permanent injury through cooling blankets and devices that slow the flow of blood and prevent organ damage after a heart attack, accidents, and, yes, strokes. He tweeted from his hospital bed: "I'm living proof this technology works. I had a mid-brain stroke and used the helmet immediately. I'm alive."

It's called a cryo-helmet, which is used by some NFL and baseball players who take hits to the head. Inside it frozen gel packs are pressed against the head, cooling it.

"When you were a kid and you got hurt, the first thing mom did was put ice on it," Dr. Varon said. "So I told my wife, I don't care who's my doctor, I'm going to wear this helmet."

He remained in the hospital for several weeks. Then came the physical therapy so he could walk again and speech therapy as well. His one break was a trip home with his wife to see his father. In mid-flight, a passenger had a medical emergency. Dr. Varon hopped on one leg to his rescue.

Dr. Varon channeled that passion into his recovery, which appears to be nearly complete.

"He started playing racquetball again, went on vacation. One of my best patients to recover from the Wallenburg syndrome," said Dr. Joel Joselevitz, of University General Hospital, Houston.

Dr. Varon believes hypothermia played a role in his own recovery. As much as that, he says it was his determination to quickly overcome the effects of a stroke. As a physician forced to be a patient, it's changed the way he interacts with the people he treats.