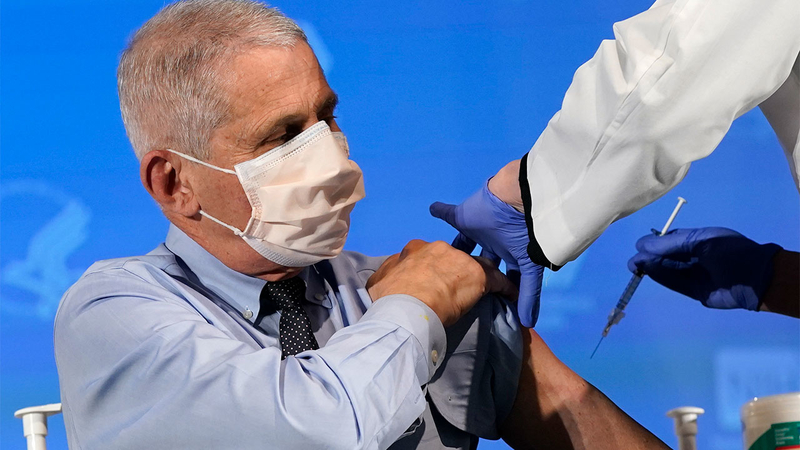 BETHESDA, Md. -- The nation's top infectious disease expert has received the initial dose of the newest COVID-19 vaccine alongside other federal health leaders who helped oversee its development.

The vaccinations Tuesday at the NIH campus outside Washington are part of a broader government effort to bolster public confidence in the safety of two COVID-19 vaccines recently cleared by U.S. regulators.

President-elect Joe Biden received his first dose of the coronavirus vaccine on live television Monday. He took a dose of Pfizer vaccine at a hospital not far from his Delaware home, hours after his wife, Jill Biden, did the same. Vice President-elect Kamala Harris and her husband are expected to receive their first shots next week.

President-elect Joe Biden received his first dose of the COVID-19 vaccine on live television on Monday, Dec. 21, as part of a growing effort to convince the American public the inoculations are safe.

Other top government officials have been in the first wave of Americans to be inoculated against COVID-19 as part of the largest vaccination campaign in the nation's history.

Vice President Mike Pence, House Speaker Nancy Pelosi, D-Calif., Senate Majority Leader Mitch McConnell, R-Ky., and other lawmakers were given doses Friday. They chose to publicize their injections as part of a campaign to convince Americans that the vaccines are safe and effective amid skepticism, especially among Republicans.