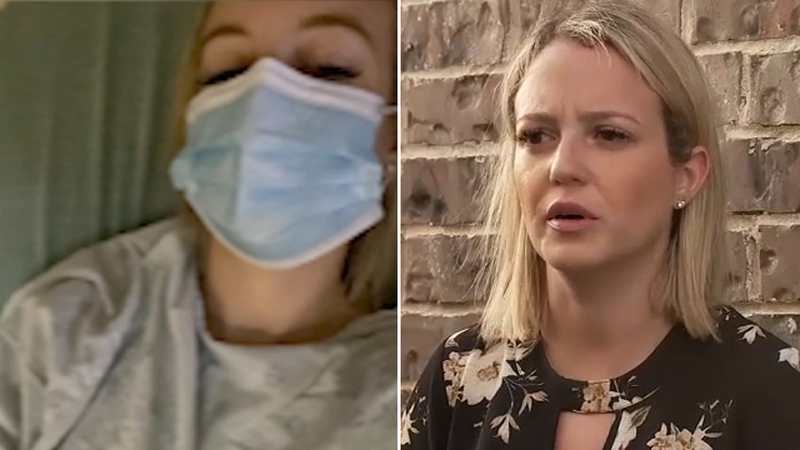 HOUSTON, Texas (KTRK) -- Liliana Segovia is not hiding. She is showing her face and using her real name, despite the threat she believes she and her daughter face.

"He has stated he will not stop until we are dead," Segovia told ABC13.

Segovia says she has lived in fear for at least three years. According to court records, Jordan Arnett, her ex-boyfriend with whom she shares a daughter, was convicted of misdemeanor assault for punching her in the face in 2017. He's accused of violating protective orders, beating up another woman and, in an angry fit, breaking into Segovia's house just three weeks ago.

"I ended up in the hospital with a concussion. Our 4-year-old daughter witnessed everything," she said.

Each time, she said he paid a low bond and was out of jail within hours.

"We are provided no safety and he is out doing his own thing, living his life, when I'm feeling like I'm the problem," Segovia said.

Galveston County Judge Kerry Foley declined to comment, citing the Texas Code of Judicial Conduct because the cases are pending.

In an email, Arnett's defense attorney, Winston Cochran, wrote, "Judges follow guidelines designed to find balance between complying with the Eighth Amendment requirement of reasonable bail and keeping the jail population at a manageable level in light of the COVID-19 crisis."

Frustration with the system can be hard to get beyond, said Thecia Jenkins, Training Director, Harris County Domestic Violence Coordinating Council.

"Many times, victims, survivors feel as though the system has let them down. I want to encourage someone who is out there not to give up on the system because we are working to put things in place to assist survivors of domestic violence," Jenkins said.

Domestic violence cases and outcries have increased by double digits during the pandemic, Jenkins said, and the crimes have been more violent. She advises victims to work with advocates who can make phone calls and keep up with dates and paperwork for them.

Sylvia Rodriguez is a success story who was alerted to Segovia's situation.

"I'm a survivor. It can be done," Rodriguez said. "If you do have to give him a bond, at least make it a high bond, a higher bond."

Segovia vows to remain persistent and outspoken, despite the potential threat.

"He continues to do this because he knows there are no consequences," she said. "He knows he can pay $500 and get out of jail every time and now we're at six times. Next time, I may not be alive."

If you or anyone you know is a victim of domestic violence, call the National Domestic Violence Hotline at 1-800-799-SAFE (7233) for help.

A GoFundMe account has been set up to help Segovia.