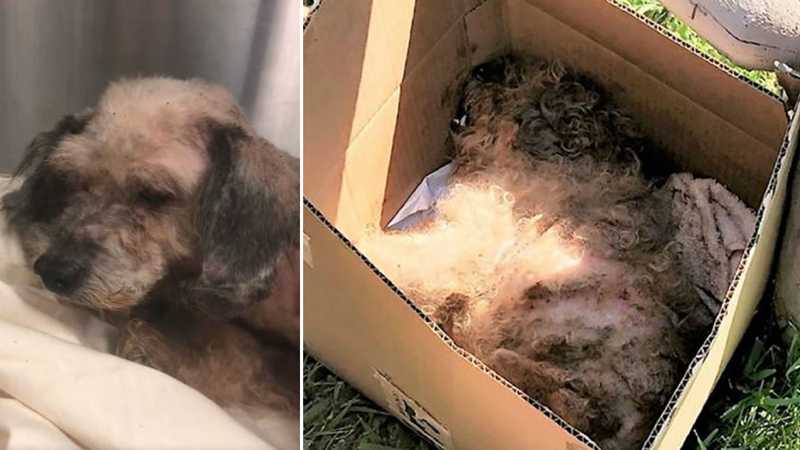 TINTON FALLS, New Jersey -- Authorities in New Jersey are looking for the person who left an elderly dog in a cardboard box next to the road in front of an animal shelter.

The female poodle, estimated to be at least 10 years old, was found in the hot sun without water or food outside the Associated Humane Society in Tinton Falls.

Volunteer Meghan Lynch spotted the dog and also discovered a note that read, "Found this poor thing at a cleaning job. No idea what to do, thought maybe you would know. Found in Howell. Thank you. Hope you can help."

Lynch has volunteered at the shelter for five years.

"I park here every day when I come, and when I pulled up, I saw the box on the roadway, and I knew the box didn't belong here," she said. "When I opened the box, I saw the dog. I thought she was deceased. I could even smell her from this height. And then I saw she was gasping for air."

The Humane Society has dubbed the pooch "Halle" and is taking care of her while they try to find the suspect. Dr. Emily Woods is seeing to it that her agony is over.

"She's an older dog, so we're taking it slow," she said. "We don't want to sedate her while we groom her. So we're just doing it bit by bit, and she's been very patient for everything. She's a very nice little dog."

They say she is resting comfortably and has a good appetite, but her sight and hearing aren't the best.

"Whoever owned her did not keep her in good condition," shelter manager Lindsay Papa said. "She was completely matted."

Officials say the fact that the dog was left in the box instead of being brought inside leads them to doubt the story told in the note.

The shelter is asking for information as to who is responsible, as well as for donations to help pay for Halle's medical care.

There are cameras outside the shelter, and technicians are trying to see if they can enhance the video to get a better idea of who may have dropped the dog.
Report a correction or typo
Related topics:
pets & animalstinton fallsmonmouth countyanimal crueltyshelteranimal abusepetdog
Copyright © 2022 WABC-TV. All Rights Reserved.
TOP STORIES
LIVE: 14 students, 1 teacher dead in TX school shooting, gov says
Weather Alert Day: A round of strong thunderstorms expected overnight
Primary runoff sets up mid-term contests for AG and Lt. Gov. positions
NOAA predicts above average hurricane season for 2022
Window washers rescued from Houston high-rise in downtown
HPD searching for suspect accused for killing teen this weekend
Missing Alvin ISD employee found safe after he was last seen May 19
Show More
Ready to cast your ballot? 50 primary races headed to runoffs
Hidalgo releasing data on gun-related homicides ahead of NRA meeting
Mickey Gilley's life to be celebrated at public memorial in Pasadena
It's grub time H-Town! Restaurant Weeks dates have been released
Texas' anti-censorship law awaits SCOTUS ruling
More TOP STORIES News