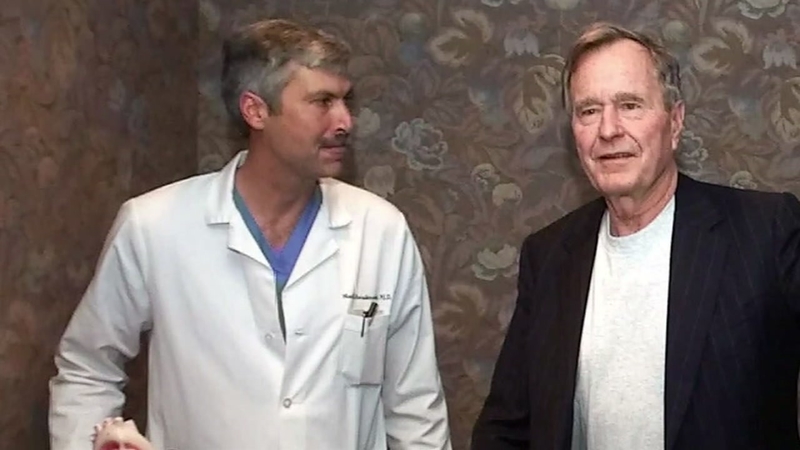 First responders describe effort to save doctor's life after shooting

HOUSTON, Texas (KTRK) -- Houston Police say it was just before 9 a.m. Friday, during rush hour in the Texas Medical Center, when 65-year-old Dr. Mark Hausknecht was shot and killed while riding his bicycle to work.

A private ambulance passing by pulled over to help.

"I saw somebody flagging us down and I said, 'you know, something's wrong," said the EMT, who asked not to be named.

"We stopped, rendered aid to the best of our ability. We're limited when we have a patient loaded, we can't act as a normal ambulance at that point in time. We can pretty much just give first aid," said the paramedic who jumped out to perform CPR and monitor the doctor's vital signs.

The men said they did what they could, but tell us Hausknecht was not conscious.

They describe the scene at 6600 Main Street as oddly calm with few people who realized what happened.

A medical professional was shot to death by a gunman in the Medical Center, police say.

They say several witnesses were on the phone with 911, and one man was on the ground comforting the doctor's head.

The EMT and paramedic stayed with the doctor until Houston firefighters arrived on scene to take over.

The news of the shooting sent shockwaves through Houston's medical community with many people telling Eyewitness News that Hausknecht was renowned, beloved and skilled.

With nearly 40 years of experience, he saw thousands of Houstonians and even treated high profile patients like former President George H. W. Bush.

He helped found Houston Cardiovascular Associates and worked both at Methodist Hospital and Memorial Hermann Hospital.

The three organizations sent their condolences through statements to Eyewitness News calling Dr. Hausknecht a "leader", "a compassionate physician", "a cherished friend" and "wonderful human being."

On the sidewalks, he was known as the pedaling physician.

"I saw him almost every day, driving on his bike," said Erick Estrada, a valet in the Texas Medical Center.

"I'll have my headphones on passing by and he'll like give me a heads up every time he would pass by, because he's hauling through you know," said another worker.

Police are still searching for the shooter, who they say was also on a bicycle.

Investigators believe the gunman was following behind the doctor for two blocks before shooting him.

The suspect is described by police as a man about 30 years-old, light skinned possibly white or Hispanic, clean shaven with a slim frame.

They believe he was wearing a tan cap, sunglasses and khaki shorts.

If you have any information regarding this crime, call Crime Stoppers at (713) 222-TIPS. You can also submit your anonymous tip online at www.Crime-Stoppers.org.

Follow Shelley Childers on Facebook and Twitter.
Report a correction or typo
Related topics:
houstontexas newshomicide investigationshootingbicycleman killeddoctorsemt
Copyright © 2022 KTRK-TV. All Rights Reserved.
TOP STORIES
Deputies escort body of fallen HCSO Sgt. to funeral home
Biden confirms he will nominate first Black woman to SCOTUS
Armed driver was trying to rob another driver on Katy Fwy, police say
These jobs are hiring, and they pay more than $14 an hour
Cool temps through the weekend with a warm-up next week
K9 stabbing suspect accused of killing father with dumbbell
No bond granted for suspect in Pct. 5 corporal ambush killing
Show More
Attorney of man questioned in dad's death wants him to seek help
HPD officer's bodycam video released in crash that killed 75-year-old
You could get paid to get your COVID vaccine or booster
World remembers Holocaust as antisemitism rises in pandemic
Notorious gangster reflects 30 years after becoming FBI informant
More TOP STORIES News