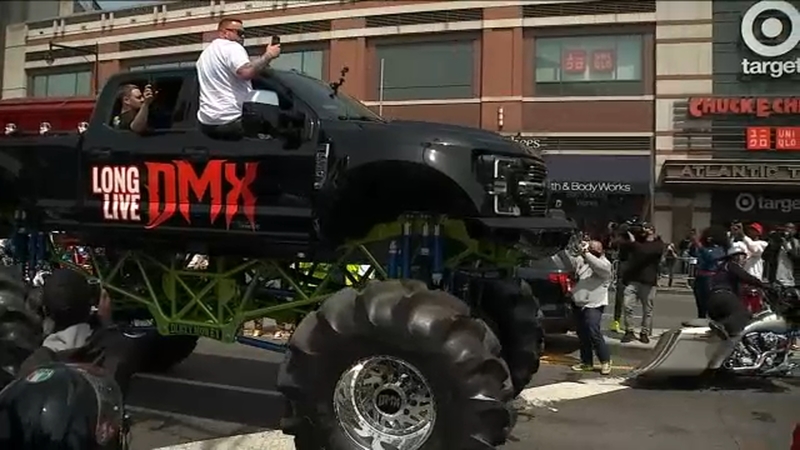 Celebration of life held for DMX

NEW YORK -- It was a final goodbye on Saturday for the late hip-hop artist DMX in New York.

WATCH THE CELEBRATION OF LIFE FOR DMX HERE:


The procession called "The Ruff Ryders 2 The Rescue: Ryde 4 Life" started at Yonkers Raceway near Empire City Casino in Yonkers.

A monster truck carrying a casket with "Long Live DMX" emblazoned on the sides of the vehicle played the rapper's music and led hundreds of motorcyclists from Yonkers, where DMX was raised, then south to the Barclays Center in Brooklyn.

DMX memorial at Barclays: thousands of bikes and his casket in a monster truck. Incredible. pic.twitter.com/VDeeYS76M5

Inside the Barclays Center were 2,000 fans, friends and his family, shining the eternal light on DMX and showing how he was a fun, kind father of 15 children.

DMX, whose birth name is Earl Simmons, died April 9 after suffering a "catastrophic cardiac arrest." He spent several days on life support after being rushed to a New York hospital from his home April 2.
EMBED More News Videos

DMX, whose real name is Earl Simmons, had been in "grave condition" in a New York hospital after suffering a heart attack on April 2.

The 50-year-old Grammy-nominated rapper delivered iconic hip-hop songs such as "Ruff Ryders' Anthem" and "Party Up (Up in Here)." He also starred in several films including "Belly" and "Romeo Must Die."