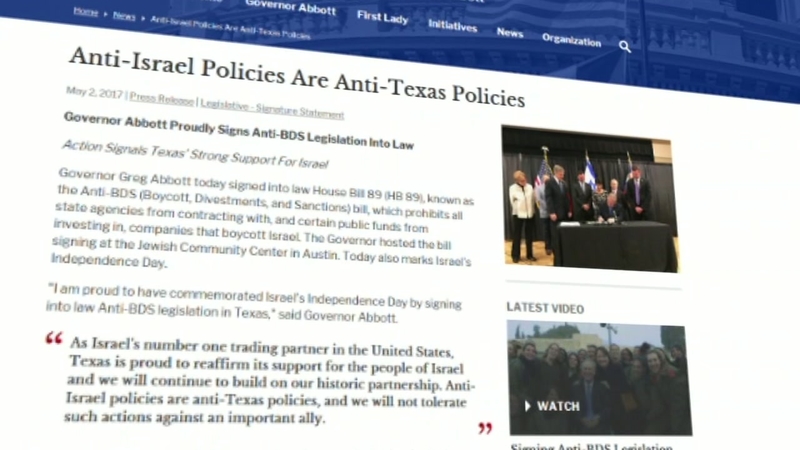 DICKINSON, Texas (KTRK) -- It was one of the hardest areas hit by Hurricane Harvey, but a clause in a grant application has many asking questions in the city of Dickinson.

In section 11 of the application, applicants must agree to not boycott Israel during the agreement.

"The application clearly requires people to have a certain political expression in order to get government benefits," Attorney Randy Kallinen said.

The ACLU of Texas issued a statement and called the requirement unconstitutional. A recent Texas law requires all state contractors to certify that they are not participating in boycotts of Israel.

The city of Dickinson, Texas is requiring people applying for Hurricane Harvey aid to promise not to boycott Israel. This is unconstitutional.

The city of Dickinson attorney said they are following the law. House Bill 89, also known as Anti-BDS, prohibits state agencies from contracting with and certain public funds from investing in companies that boycott Israel. The bill was signed by Governor Greg Abbott in May.

Kallinen said when it comes to individuals, there may be questions about how the law is interpreted.

"Conditioning the much needed relief from Harvey and other disasters upon adopting a certain political position is really something that is very distracting and slows down the process of rebuilding after Harvey," he added.