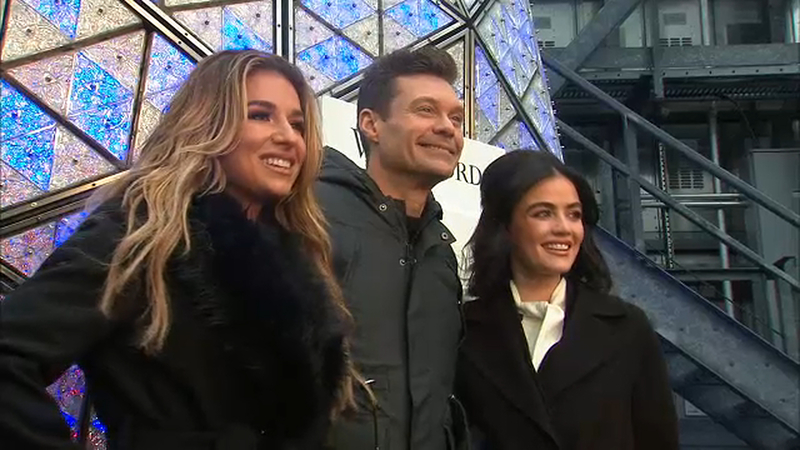 "Dick Clark's New Year's Rockin' Eve" is named for the late host who made the show a must-watch institution, and he personally chose Seacrest to take over the broadcast.

Lucy Yang has the details on closures, and Times Square security

And Dick Clark offered him one piece of advice.

"Just before midnight, shut up, be quiet, let the sounds and pictures tell the story," Seacrest recalled.

It was pouring rain last year, and it was freezing cold the year before. So Seacrest is looking for forward to better weather this time.

"We don't know what to do because we won't be being poured on," he said. "We won't be having warmers on our cheekbones, so who knows what will happen?"

We caught up with Seacrest and co-host Lucy Hale on the roof of One Times Square, at the base of the massive 24-story pole where the ball drops. 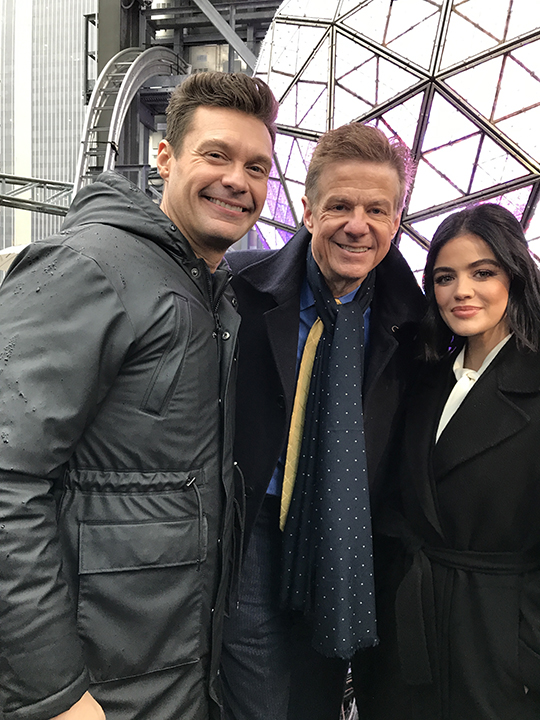 This year marks the first time Hale is hosting from New York City after several years of appearing from New Orleans, and she joked that she is bringing the good weather with her.

There's nothing quite like the electricity generated by a million people celebrating at the same time in the same place.

"Everybody's on the same page," Seacrest said. "There's unity in one place, from people from all walks of life, which is pretty special."

Like many of us, Seacrest and Hale grew up watching this particular show.

"I could never quite make it to midnight," Hale said. "But never, ever, in my wildest dreams did I think I would be here. Is this real life? I don't know."

This marks Seacrest's 15th year on the broadcast, and he plans a retrospective.

"A look back at the last decade, since we are going into a new decade, of all of the different artists, from Taylor Swift to Jennifer Lopez," he said. "All of the wonderful memories."

And that includes the time he got stuck in an elevator going up to where to the 6-ton ball drops.

The Broadway cast of "Jagged Little Pill" will kick off the festivities. The show features the music of Alanis Morissette, who will join the performance from her show live.

Post Malone will also be making his Times Square debut, as will country star Sam Hunt and boy band BTS.

The musical acts have provided the most nerve wracking moments through the years, prompting me to ask Seacrest about what we don't we see on television.

"Things happen, or not, up until the last second," he said. "There are many times when we are five seconds away from tossing to the artist and they're not on their mark, and just at the last second they step on to the X and we go."

Shortly after the countdown to midnight, singer Jessie James Decker will make a lucky Powerball winner very happy, as part of the "First Millionaire of 2020" contest.

"I get to be a very nice messenger and tell someone they have won a million dollars," she said.

It' two rookies and a veteran, but nobody seems nervous. Hale set a high bar for success.

"If I don't fall, if I can read the prompter correctly and have the time of my life, I'll be happy," she said. "I can hopefully accomplish two of those three."
Report a correction or typo
Related topics:
arts & entertainmentnew york citytimes squaremanhattannew year's eveentertainmenttimes squareryan seacrestsandy kenyon
Copyright © 2022 KTRK-TV. All Rights Reserved.
TOP STORIES
51-year-old on the run as suspect in corporal's ambush killing
Sergeant was to walk daughter down aisle until his hit-and-run death
Mom shares story of son's 'scary' battle with COVID complications
H-E-B's Scott McClelland retirement and what's next
Drying out but staying cool this week
LULAC set to sue Houston City Council for lack of Hispanic members
New security director aims to improve safety for Jewish organizations
Show More
IRS changes you should know before submitting taxes
Cause of death revealed for 23-year-old woman found dead after date
Texas among states suing Google over claim it's misleading consumers
Man accused of stabbing K-9 in The Heights now charged
'We knew something big exploded': ABC13 recalls moment of Watson blast
More TOP STORIES News