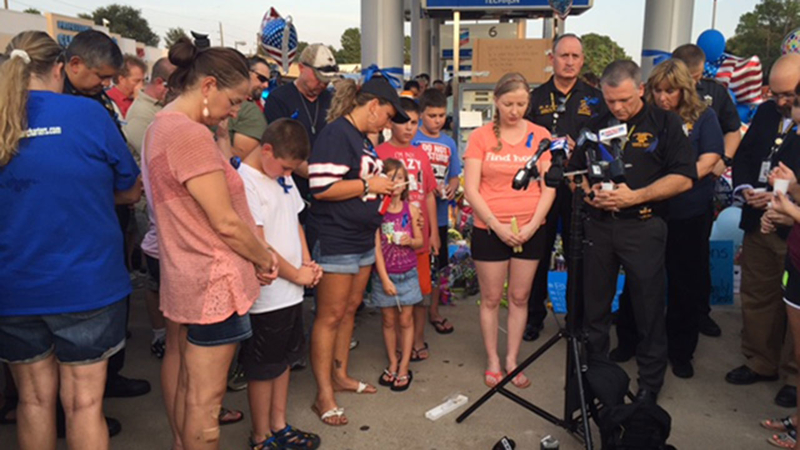 Harris County Deputy Darren Goforth was slain at a Cypress gas station on Telge and West Road, fueling his patrol car, ambushed by a man he never saw approaching him with a gun, a vigil was held in his memory.

No one could have predicted how many people would attend.

At least 800 blue ribbons were handed out to law enforcement officers, neighbors, friends, and strangers who wished to honor a man and the badge he wore.

Andre Reynolds knew him since grade school. "Darren would have given you the shirt off his back. He was such a good guy."

A statement from his widow supports that. "He was good, and it was my blessing to have him as my husband and my best friend."

Those who had a personal connection to him often choked back tears when describing him. Others cried at the ultimate sacrifice he made in uniform, not in a face to face confrontation, but at the hands of what everyone has consistently called a coward.

The fact that 31-year-old Shannon Miles is now charged with capital murder, held without bond, represents something, but won't bring their loved one back, they say.

The vigil served a dual role to show support for law enforcement. "It can start something in this community, this town, and then spread to other towns," said Reynolds.

An HPD officer echoed that optimism. Looking at the crowd filling the parking lot, he said, "This is the good to come out of something like this. It's overwhelming the support for us here."

Here is the full statement released by Deputy Goforth's wife:

There are no words for this. All the language that I know is inadequate for what I want to express but for Darren I will try. I can't describe him with clichs and platitudes - I need to do better than that. He deserves better than that.

My husband was an incredibly, intricate blend of toughness and gentility. He was loyal...fiercely so. And he was ethical; the right thing to do is what guided his internal compass. I admired this quality, perhaps the most. For that's what made Darren good and he was good. So, if people want to know what kind of man he was....this is it. He was who you wanted for a friend, a colleague and a neighbor.

However, it is I who was blessed so richly that I had the privilege of calling him my husband and my best friend.