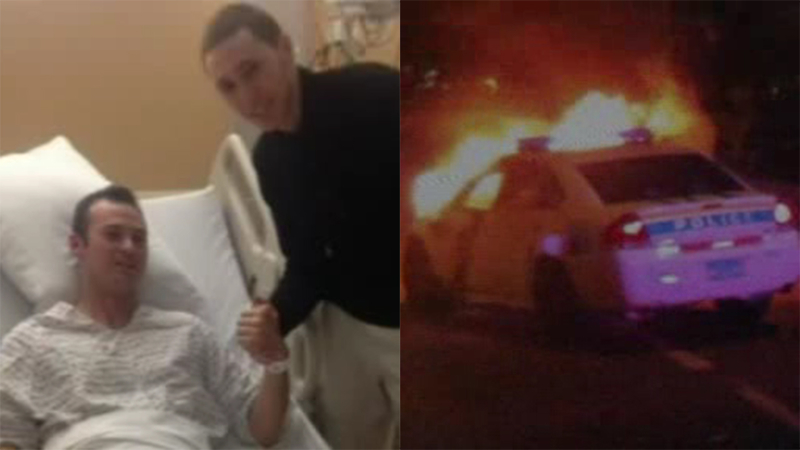 RIDLEY, PA -- A 19-year-old man, who rescued a Philadelphia police officer from a burning patrol car, took a big leap Thursday toward fulfilling his great ambition - to become a cop.

"Like a dream come true almost. I really just can't wait to get out there, get on the job, get on the street and actually make a difference," said Joseph Chambers.

But Chambers has already been doing that.

He may have just graduated from the Delaware County Police Academy, but his chance encounter with Philadelphia Police Officer Matt Kimsey is the motivation for getting him to this day.

Their paths crossed when Officer Kimsey found himself in grave danger, trapped in a fiery blaze.

Chambers, then a volunteer firefighter, pulled him to safety.

"Hopefully when he looks at me, he's kind of like my brother, so hopefully he's seeing a little brother walk across the stage," said Chambers.

"Absolutely proud. I couldn't think of a better person to walk across the stage and want to be a police officer," said Kimsey. "I look up to him just as much as I hope he looks up me."

Since Kimsey's recuperation, the pair have remained close - Kimsey like an older brother encouraging Chambers to rank and file.

Almost two years later, alongside his family, Chambers had the man who inspired him to wear a badge cheering him on.