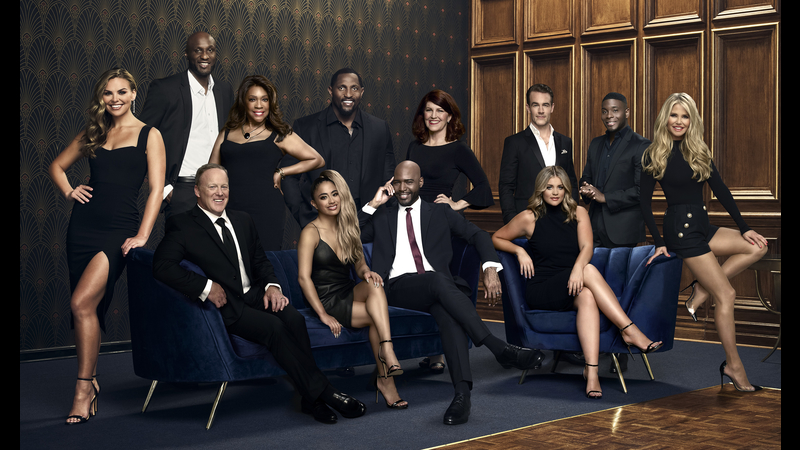 Season 28 champs revealed on 'Dancing with the Stars'

LOS ANGELES -- The "Dancing with the Stars" couples have seen nearly three months of foxtrots, tangos, waltzes and more; now, we're learning who gets to take home the coveted mirror ball trophy.

The Season 28 finale saw Lauren Alaina and Gleb Savchenko, Ally Brooke and Sasha Farber, Hannah Brown and Alan Bersten, and Kel Mitchell and Witney Carson leaving it all out on the dance floor, in one of the most competitive seasons yet for the long-running reality show. Everyone performed two routines; one, a re-visit of a dance they had done before and of course, the fan favorite freestyle!

SPOILER ALERT: Results will be revealed after the rundown of scores below

Here's a list of the judges' scores, from highest to lowest:

Ally Brooke- 30 out of 30 for jive; 30 out of 30 for freestyle - 60 out of 60 total
The pop singer says she hoped to use the experience to help her gain the confidence she needs to up her performing. She did that and beyond. Ally thanked the judges for saving her three times and allowing her to make it to the last dance. Len called her jive fantastic; Bruno told Lauren she's working on full throttle, top gear; and Carrie Ann said the routine was exactly what we needed to see in a finale. When they returned an hour later for the freestyle, they picked up right where they left off... full of energy, proper steps, power, and fun. Bruno called the dance, to Gloria Estefan's "Conga", a show stopper; Carrie Ann said she's never seen anything like it; and Len liked the pace, the steps, and how the music matched the movement.

"Dancing with the Stars" contestants react after the mirror ball trophy was awarded during a nail biting finale.

Kel Mitchell- 30 out of 30 for jazz; 29 out of 30 for freestyle - 59 out of 60 total
Kel's also proud of how far he's come, and is happy to take the "most improved" crown. He and Witney go back to their "High School Musical" jazz routine and not only does the crowd go wild, so do the judges with a perfect score. Carrie Ann said the dance showcases everything he's good at doing; Bruno loves his musicality and positive spirit; and Len called him the leader of the pack. Before their freestyle, Kel and Witney reflected on their friendship (he's calls her lil' sis), and the vibe they found as "Shaq and Kobe", two people who could help each other win. Their routine was a straight out hip hop explosion to the Kriss Kross song "Jump". Carrie Ann and Bruno loved it, saying Kel educated us all, and brought the house down. Len thought it was a little too similar to their first dance, so he only scored them a "9." Cue the audience: BOO!

Hannah Brown - 28 out of 30 for Viennese waltz; 30 out of 30 for freestyle - 58 out of 60 total
It's been a roller coaster 11 weeks for Hannah but she now admits she's grateful that it hasn't been easy because she's learned so much about herself. The season was filled with breakdowns and breakthroughs, for all the world to see! She feels being in the final four is a win. One odd moment: just before she said she wanted to be known for more than handing out roses ("The Bachelorette"), ABC played a promo for next season's "Bachelor" with Peter the pilot. And guess who shows up as a surprise guest? Yup. Hannah. Before the freestyle, she thanked Alan for helping to remind her what trust is all about. Their dance started to Alicia Keys' "This Girl is on Fire," and there was literally, fire. It represented Hannah's journey quite well. Len said the dance caught him unaware in the best way; Bruno called it dramatic and acrobatic; and Carrie Ann thinks Hannah is right now living her best life.

Lauren Alaina - 27 out of 30 for foxtrot; 30 out of 30 for freestyle - 57 out of 60 total
The country singer admitted she's been in shock each and every week when she's been voted through. But she's proud of her improvement, and how she's grown physically, spiritually and mentally. She and Gleb revisit their foxtrot to "Jolene." Bruno praised her commitment to character; Len liked the mix of flair, with care; but Carrie Ann felt she was holding back a bit and asked her to let it all hang out in the freestyle round. Boy did she ever! Gleb choreographed a fun country-centric routine to a Luke Bryan song and Lauren never looked better. She called the ending of the competition bittersweet, and said Gleb has been a perfect partner. He returned the kind words, saying she's made him a better teacher, and a better human. Carrie Ann thought the dance was a perfect end to this chapter in Lauren's life, and a celebration of all things Southern.

SPOILER ALERT: Who gets the mirror ball?
There were rapid-fire results at the end to let us know who won. In the end, the mirror ball went to former "Bachelorette" Hannah Brown and her pro partner Alan Bersten.
Report a correction or typo
Related topics:
arts & entertainmenthannah brownabcdancing with the starserin andrewsreality television
Copyright © 2022 KTRK-TV. All Rights Reserved.
TOP STORIES
Man arrested in corporal's murder is 25-year fugitive, officials say
Deputies escort body of fallen HCSO Sgt. to funeral home
Biden confirms he will nominate first Black woman to SCOTUS
Armed driver was trying to rob another driver on Katy Fwy, police say
These jobs are hiring, and they pay more than $14 an hour
Cool temps through the weekend with a warm-up next week
K9 stabbing suspect accused of killing father with dumbbell
Show More
No bond granted for suspect in Pct. 5 corporal ambush killing
Attorney of man questioned in dad's death wants him to seek help
HPD officer's bodycam video released in crash that killed 75-year-old
You could get paid to get your COVID vaccine or booster
World remembers Holocaust as antisemitism rises in pandemic
More TOP STORIES News