'Dancing with the Stars' recap: See which celebrity from Season 27 was sent home 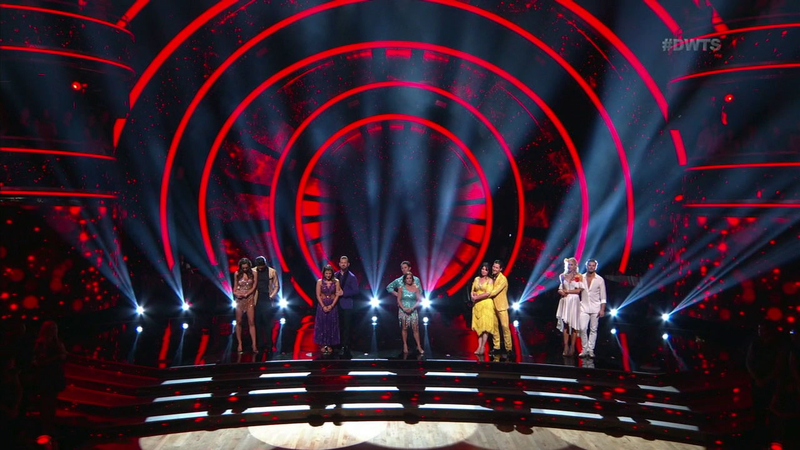 'Dancing with the Stars' sends home 1st celebrity from Season 27

LOS ANGELES -- The 13 celebrities gathered in the ballroom floor once again on Tuesday for the second of a two-night dance spectacular. The show started with a recap of night one, sprinkled with results.

The first batch saved: DeMarcus Ware and Tinashe, the two stars who led the judge's scoreboard. There was also good news for "Grocery Store Joe" Amabile, Juan Pablo Di Pace and Bobby Bones. Those in jeopardy: Nancy McKeon, Nikki Glaser, John Schneider and Alexis Ren. The results continued and saw Milo Manheim and Evanna Lynch marked as safe; that left Danelle Umstead and Mary Lou Retton in jeopardy. But wait! One more couple is safe! Surprise! It's John Schneider and Emma Slater. The five couples who are still in jeopardy had to dance again this round. The couples were tasked with creating a new routine featuring the same dance style they performed on Monday night's show.

Here's a rundown of the five dances, from highest score to lowest:

Alexis Ren- 23 out of 30
Head judge Len Goodman seemed downright mad that Alexis and Alan were in jeopardy. Luckily, their second jive was even better than the first! Bruno Tonioli said he appreciated that she came back so focused. And Carrie Ann Inaba questioned whether this routine was even harder than the first. Alexis said yes, but she has her eye on the goal of making her late mother proud. So far, mission accomplished.

Nancy McKeon- 21 out of 30
We saw a much calmer Nancy for round two. Val didn't go easy on her for the second quickstep and the judges appreciated that. Carrie Ann thought they "upped the game" with a harder routine and it came across as sparkly and confident. Bruno liked seeing a vivacious, not-so-tense Nancy. And Len praised the couple's body contact and ability to move as one.

Mary Lou Retton- 21 out of 30
Mary Lou and Sasha attacked the cha-cha once again, heating up the dance floor and dancing to Donna Summer's "Hot Stuff." Len Goodman applauded the Olympic champ and called the routine "clean, with no messing about." Bruno told Mary Lou she was back with a vengeance and she showed she can deliver under pressure. From Carrie Ann: nailed it!


Nikki Glaser- 18 out of 30
Nikki's nerves were visible during the debut but she seemed more at ease for round two. She and Gleb did another salsa and it was much improved. Len said the first night it seemed the dance controlled Nikki; but this time, she controlled the dance. Carrie Ann asked to see a little more power. Bruno liked that he saw friskier, flirty fun in the routine.

Danelle Umstead- 18 out of 30
It was a return to the world of foxtrot for Danelle and Artem. Like night one, it is pretty mind-boggling to think she is legally blind and able to move as gracefully as this. Bruno called the routine lovely and told Danelle he was going in the right direction. Carrie Ann said she was again impressed; and to Len she is an inspiration.

A last-minute round of live voting gave us our final tally. Voted as safe: Danelle and Artem, Alexis and Alan, Mary Lou and Sasha, and Nancy and Val. That means Nikki Glaser is the first celebrity to be voted off of Season 27.