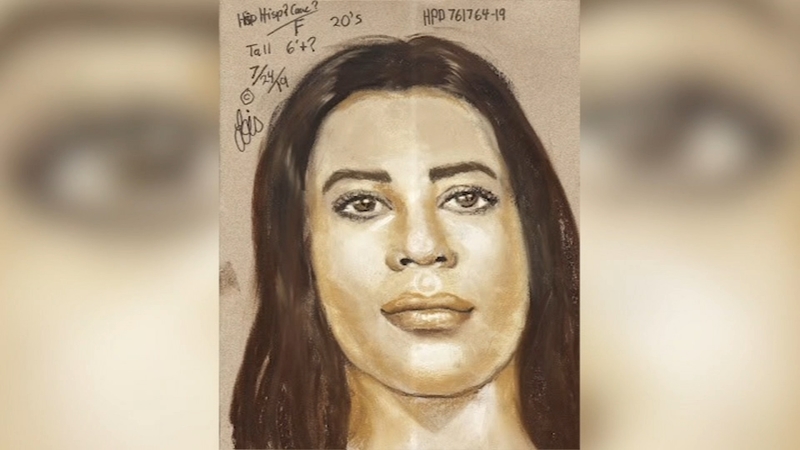 Police looking for woman who used knife to carjack teen

HOUSTON, Texas (KTRK) -- Police released a sketch of a woman who used a knife to carjack an 18-year-old in Spring Branch.

It happened on June 15 at the Casa De Leon restaurant, located at 9217 Long Point Rd.

Investigators say as the victim was getting out of his brown Chevrolet Silverado, the suspect held the knife to the victim's side and another man pointed a gun at him before making him get into the backseat of the truck.

"The complainant stated that he complied and the male got into the backseat with him while continuing to point the gun at him," said Crime Stoppers in a news release Friday.

Officials say the victim was pushed out of the truck at a nearby apartment complex.

"As the suspect drove off in the victim's truck, the suspect fired two gunshots, but the victim was unsure if they were towards him," read the release.

The truck was found the next day near Elmview and Yupondale Drive at around 11 a.m. with 12 bullet holes and 13 bullet casings around it. Officers also found someone's blood inside, near the driver's side door.

Police say the blood does not belong to the victim.

The suspect in the sketch is being described as a white or Hispanic female in her 20s with long black hair, standing between 5'8" and 5'10" tall and weighing 160 pounds.

Tips can also be submitted online at www.crime-stoppers.org.

Crime Stoppers may pay up to $5,000 for information leading to the charging and/or arrest of the suspect in this case.

A man says one of the suspected carjackers may be his son.