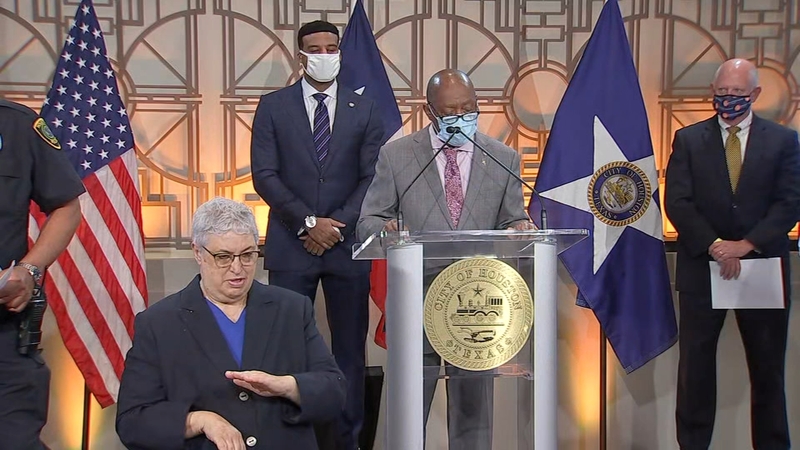 HOUSTON, Texas (KTRK) -- During a news conference on Wednesday, Mayor Turner and other city of Houston leaders urged Houstonians to continue to get tested for COVID-19.

Dr. David Persse said the city is starting to see a huge decline at large COVID-19 testing sites in Houston.

"My fear is that people have misinterpreted a little bit of good news into thinking that it's a lot of good news," Persse said. "So, I want to remind folks that if we as a community are going to stop this virus, which we can do, we've done it before and we can do it again."

Turner also added that the city's positivity rate is still in the double digits at about 15 to 17%, but his goal is to bring the number down to 5% or below by the end of August.

"We must continue to practice all the safety protocols together. That still means wearing a mask, social distancing, washing your hands and getting tested," Turner said. "Getting tested is the best way to empower yourself and protect your family and the community."

The emphasis on testing came after Turner announced 709 news COVID-19 cases in the city of Houston, bringing the total to 52,320. Fourteen new deaths were also reported, bringing the city's total to 503.

"We still have a community spread in Houston, and we want to see these numbers decline," Turner said.

The mayor also emphasized the importance of wearing a mask while clarifying the new policy which allows Houston police officers to write $250 tickets to those who don't wear masks in public.

RELATED: HPD to issue $250 fines for mask order violations as mayor gets aggressive with virus

Houston police chief Art Acevedo said his department has created a new system that will start tracking the warnings given to mask violators. He said after the first warning, officers will issue a citation.

SEE MORE: Here's what a legal expert had to say about the $250 mask order fine

Of the funds, $15 million will come from the federal CARES Act, but the remainder comprises of private donations and other allocations.

The private dollars are significant because renters who are undocumented immigrants would be able to apply for those funds. The federal funds, in comparison, did not allow that.

"There's so much more that's needed. This is just one of the pieces," Mayor Sylvester Turner said.

Turner also promised the latest relief program would be based on a matrix that would give preference to those with lower incomes. The first program that rolled out in May was first-come, first-served.

Nonprofit community developer BakerRipley, which administered the first round of relief, is expected to dole out the funds this time around as well.

Turner added that landlords who are participating in the program have agreed to waive all late fees and interest, which allows for a penalty free payment plan for any amount less than $2,112.