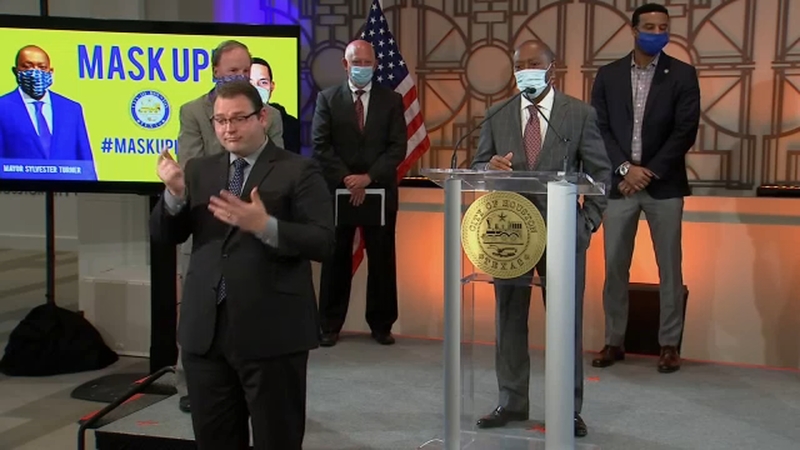 HOUSTON, Texas (KTRK) -- A day before Texas stores and restaurants are allowed to conditionally open their doors to customers, Houston Mayor Sylvester Turner offered a reminder of the city's success at keeping the coronavirus at levels lower than other major metropolitan areas in the U.S.

The mayor reported 98 new cases Thursday, bringing the city over the 3,600-case mark. Four new reported deaths brought the death toll to 56, with nearly all of them involving an underlying health condition.

Despite the cases, Turner noted early action kept the city from a catastrophic spread of the virus.

In the middle of his update, Turner and his top public health chief, Dr. David Persse, had Friday's impending reopenings of eateries, malls and other establishments that usually drive in customers to their locations. Under Gov. Greg Abbott's order, those businesses are allowed to open but to 25 percent capacity.

Dr. Persse addressed the main point of the reopenings - the limited amount of customers that can visit a place - and told managers and owners to exercise it with care and intelligence.

"We need to be smart about this," Dr. Persse said, offering an illustration of a restaurant layout. "It doesn't mean you close off 75 percent of the floor space and operate 25 percent of your restaurant. The whole point of this is to have social distancing built into your business model."

Persse said several restaurant owners told him they were going to close off certain parts of the business, to which the public health chief said wouldn't achieve their goal of safely serving customers.

The same principle applies to malls and retailers, Persse added.

He also advised business owners to run and flush out water through faucets for several minutes. With water staying stagnant for multiple weeks, he said the flushing will allow pipes to deliver safe to use water, which will be signified by its clarity, the lack of unusual odor and taste.