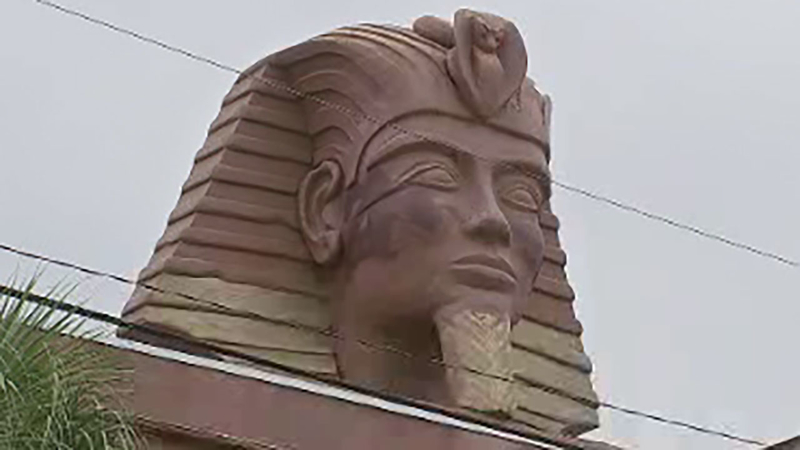 HOUSTON, Texas (KTRK) -- It's one of Houston's most well-known landmarks, left abandoned for years. But now, we are learning about a new reincarnation for Magic Island.

Known for its giant pharaoh's head rising beside the Southwest Freeway, Magic Island has sat vacant since a 2008 fire caused by Hurricane Ike.

The story behind Magic Island

"Magic Island has been asleep for about 10 years," explained architect Russell King. "It was pretty much destroyed in the hurricane. So it sat here and it's in pretty bad shape. But everybody realizes if we're going to do it, let's do it right, and it's going to be brought back bigger and better than ever."

The legendary private dinner theater club will be reimagined and that renovations are moving along. King says the new-look Magic Island will focus on first-class entertainment and dining at its finest. The owners told ABC13 they are also leasing the downstairs space to a poker club.

"The motif is still the magic of ancient Egypt but not quite as circusy as it was," he said. "(It will be) a much more sophisticated type of design."

A large outdoor terrace, as well as Las Vegas-style magic, shows in an indoor theater that seats up to 150 people. Those are just some of the changes expected for the entertainment venue.

"It's a new Magic Island. But it's the same Magic Island. We're keeping a lot of the old stuff so you can recognize it when you walk in, but it's not quite the same," said business manager Sue Smith.

Owners say they were originally aiming to re-open by November 15, but had several delays, including Hurricane Florence holding up some elements being built in North Carolina. Owners now expect to open sometime in December.