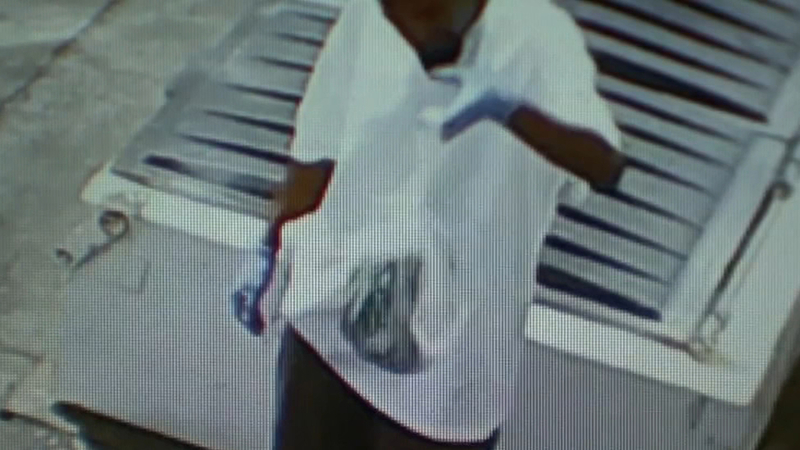 The man was seen on surveillance video rummaging through the trash bin behind a Napa Auto Parts store about 10 minutes after a woman tossed the puppies.

The man heard cries and went to take a closer look when he made the discovery on April 18 as temperatures topped 90 degrees.

The footage shows the man briefly walking around the dumpster then returning and pulling the bag of puppies out. He then walks to the front of the auto parts store, leaves them there and walks away.

Minutes later, a customer looked into the bag and alerted the store staff.

"I noticed the bag on the floor. They were tied up in the bag, so I immediately opened the bag up a little further and I proceeded to call animal services to see what I could do with them because I just couldn't leave them there," said the customer, who asked to remain anonymous.

Employees then called Riverside County Animal Control and placed the litter in a box while the anonymous customer went to buy formula and bottles to feed the pups.

Officials say the acts of kindness saved the puppies' lives. The dogs, believed to be 3-day-old terrier mixes, may not have survived the 90-degree heat had they not been found within an hour of being dumped, according to police.

All seven puppies are under the care of a rescue organization.

The suspect - who police have not publicly identified - was seen stepping out of a white Jeep, peering into a dumpster used for recyclables, then dropping the bag filled with the puppies into the pile of trash before driving away.

Riverside County Animal Service is working with Riverside County Sheriff's investigators and the District Attorney's office in building a cruelty case against the woman accused of discarding them.
EMBED More News Videos

Authorities on Monday identified a woman who was captured by security cameras throwing seven newborn puppies into a dumpster behind a Coachella store.