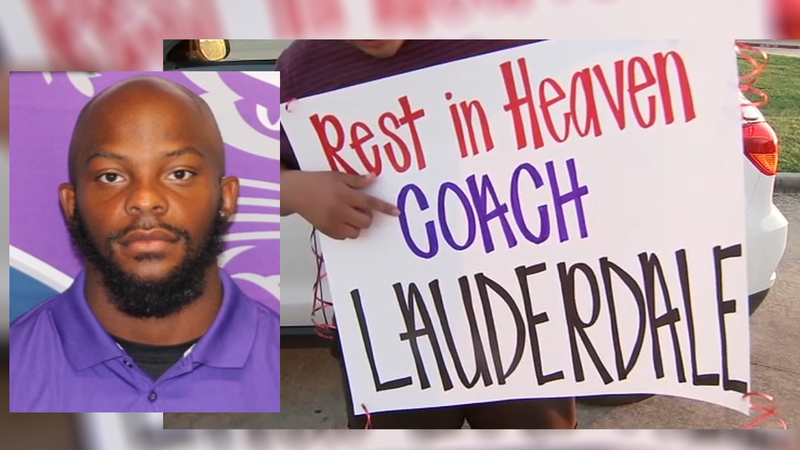 What we know about dispute that killed Houston-area coach

ROSENBERG, Texas (KTRK) -- A Travis High School coach was shot and killed Saturday afternoon during a family dispute at a sports complex in Rosenberg.

Officers said they received several calls from witnesses who said a man had been shot in the parking lot of the Seabourne Creek Sports Complex located at 3701 Fountains Drive.

Within minutes after they arrived, police arrested 28-year-old James Hamilton who witnesses said shot and killed 29-year-old Derwyn Lauderdale over a family dispute.

A Travis High School coach was shot and killed Saturday afternoon during a family dispute at a sports complex in Rosenberg.

The facility was being rented out for a series of youth football games, which police say was the reason the two men were at the same location.

An eyewitness told ABC13 that she and her grandson were sitting in their car while he prepared for his game. She said she saw a gray Hyundai Elantra pull up about five parking spaces to her left with a woman in the driver-seat. Shortly after, a black Mercedes pulled in between her car and the already parked car.

The passenger of the gray Elantra, who police identified as Lauderdale, then reportedly got out of the car with a child and began walking towards the black Mercedes. The driver then shot Lauderdale in his stomach in front of a crowd of people. The witness said the child who was walking with Lauderdale began crying hysterically.

Police say Hamilton is the biological father of Lauderdale's stepchildren.

Rosenberg police share what they believed cause the shooting of Travis HS coach Derwyn Lauderdale outside of a sports complex on Saturday.

Afterwards, the witness said the gunman got out of the black Mercedes and ran towards the crowd while the woman driving the Elantra came to the aid of the victim.

Lauderdale was transported to an area hospital where he was pronounced dead.

Hamilton has been charged with murder, according to the Rosenberg police chief Jonathan White.

"What a sad set of circumstances that took place during this event. Children came to play a game they love, only to have it ruined by a career criminal committing an act of family violence," Rosenberg police chief Jonathan White said. "Our thoughts and prayers go out to those affected by this tragedy and we will pursue appropriate charges so justice may be served."

"Dear Tiger families, I am writing with a heavy heart, after learning about the tragic and sudden death of a Travis High School staff member. According to local media reports, there was a dispute at a Rosenberg sporting complex today that led to the death of Mr. Derwyn Lauderdale, who was a first year teacher and coach here at Travis High School. This news has shocked our THS community and has left us heartbroken for his family. While we do not have additional information to share at this time, I want to make you aware and ask you join me in keeping his family and friends in your thoughts and prayers.

Please know that our THS administrative team, along with District crisis personnel, will be available to provide support to our THS community as we grieve the loss of Mr. Lauderdale. We know that students may react to loss in different ways and may not feel comfortable reaching out for help in person, and so I want to remind our entire school community about the resources available for those who need help or additional support. Again, please join me in keeping Mr. Lauderdale's family in your thoughts."

Southwest Baptist University sent the following statement regarding the incident:

"We are stunned by this news," SBU Director of Athletics Mike Pitts stated. "Derwyn had been a member of the Bearcat Family for nearly a decade and we will miss him. Our hearts, thoughts, and (especially) prayers go out to Derwyn's family and to the coaches and players of SBU Football."

Lauderdale was coaching at Fort Bend Travis High School in Richmond, TX and was highly involved in the youth football programs around the area.
From 2010-14 Lauderdale was a member of the SBU Football team. He was one of the best wide receivers ever to play at SBU. Following his playing career, he served as a member of the Bearcats coaching staff during the 2018 and 2019 seasons.

"Words can't express the loss we're feeling right now as a Bearcat Family," said Head Football Coach Robert Clardy. "Derwyn leaves a legacy here that will never be forgotten by his former teammates and coaches. He was a great friend and mentor to all."