Supermodel Cindy Crawford was faced with a lot of praise -- and confusion -- over the weekend after an old "un-retouched" magazine photoshoot of her was leaked.

British TV personality Charlene White sent out a tweet with a 'non-retouched' photo featuring the supermodel in lingerie and a fedora. In the photo, Crawford -- a mother of two who turns 49 this week -- appears to have fat on her stomach and legs, in contrast to the smooth body image that readers of magazines are accustomed to seeing.

The photo, Twitter users claimed, would be featured in an upcoming "Marie Claire" interview. Rumors also circulated that Crawford herself had insisted the photos be printed without the use of retouching. 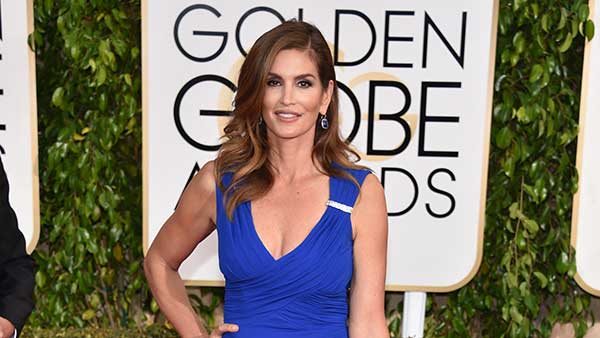 PHOTOS: Cindy Crawford looks through the years
See photos of supermodel Cindy Crawford, her career and her family from the 1990s until today.

Praises for the model poured in, with most saying that Crawford looked even more gorgeous without photoshop.

I think I crushed my husband's spirit by showing him the Cindy Crawford untouched photo. #ItHadToBeDone

Many also complimented Crawford's attitude, saying they were glad she used her position in the public eye to bring attention to how beautiful a natural body can be. Social media users, including actress Jamie Lee Curtis, posted their own natural photos.

Wow, Hats of to Cindy Crawford for this real photo. Without photoshop. This is amazing for women world over pic.twitter.com/a5OZN8kLZh”

Could not love Cindy Crawford more for insisting that Marie Claire publish untouched, REAL photos of her #beautiful pic.twitter.com/Bn8COkJWPG

White's tweet received thousands of retweets, but the story behind the photo isn't quite what many Twitter users seemed to think. Marie Claire released a statement to clarify.

"It is real, it is honest, and it is gorgeous," Marie Claire said of the photo. It continued, however, to point out that the photo was neither new nor intended to go along with the story.

"Its origins are actually from a December 2013 cover story from Marie Claire Mexico and Latin America. It appears that this unretouched version is a leak," the magazine said.

Crawford did express the sentiment behind the viral photo, the magazine pointed out, in its Feb. 11 interview with her. She opened up about having days where she struggles with her self-image but trying her best to be a role model for her daughter.

"If we go out for ice cream I'm not going to not have any, I'm just going to have the baby-size cone," she said. "I don't want her to think that taking care of yourself means depriving yourself and not having fun."

Crawford continued to say that feeling comfortable in your own skin is "easier said than done" and that it involves exercising more restraint as you get older.

Also over the weekend, Crawford's husband, Rande Gerber, posted a photo of the model in a bikini on his Instagram account. He did not clarify whether he had used photoshop.