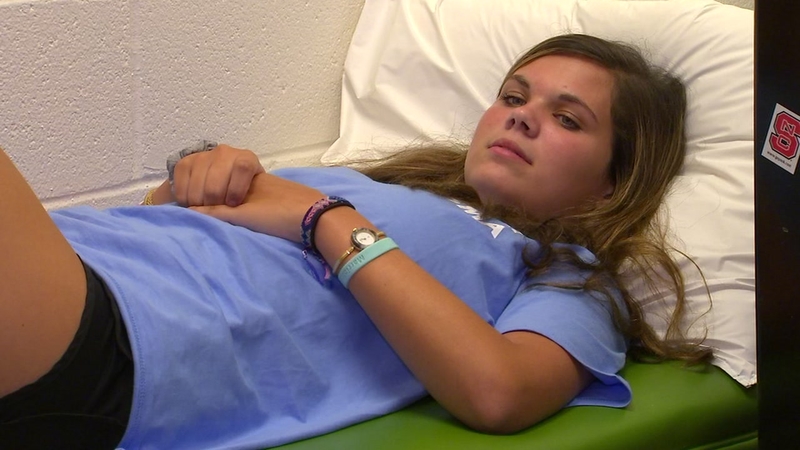 CHAPEL HILL, North Carolina -- No matter how badly this teenager was starving, she couldn't eat or drink because her body simply wouldn't allow it.

Doctor after doctor insisted on the same diagnosis. but her mom refused to accept that.

It turns out, the doctors were wrong and, because of her parents' tenacity, more people may benefit.

LewLew Whayne keeps herself alive the only way she knows how to, and that's drinking smoothies lying down.

It started last December with a stomach virus, then, one day, her food wouldn't stay down. Not even a sip of water.

"No nausea," she said. "I would eat and the food would just come up."

This went on until LewLew had to have a feeding tube. She missed an entire semester of school. Doctor after doctor kept saying the same thing.

"They blamed everything on my brain," LewLew said.

Laura knew it was physical. She refused to give up. After diving into research, she kept asking questions.

Eventually, she suspected it was something called "Superior Mesenteric Artery Syndrome."

That's a rare disorder that occurs in people who've had dramatic weight loss after cancer treatment or trauma.

It's very complicated but, in SMAS patients, the first part of the small intestine, or the duodenum, is blocked. Kind of like a garden hose getting pinched.

Food can't get through from the stomach to the intestines.

The problem is, the only way you test for SMAS is by eating or drinking lying down.

Because LewLew can drink smoothies lying down, SMAS was ruled out until her mom insisted.

She found a doctor who would test for SMAS lying down and standing up.

"And sure enough, there it was ... her duodenum shut standing up and lying down," Laura said. "But opened up enough lying down to let smoothies go through."

Dr. John Petty, a pediatric surgeon in Winston-Salem who acknowledged it wasn't LewLew's brain but a rare presentation of SMAS, agreed to do the operation.

"All in hopes to move her mesenteric artery so it will no longer collapse," Laura said.

"Everybody ... kind of had the hair standing up on the back of their neck, wondering how is this going to go? But it was pretty quick. They could tell there was a big change," Petty said.

It was a monumental change.

LewLew could eat and drink for the first time in 10 months.

Dr. Petty wants to see her rare case documented in a medical journal to serve as a lesson for doctors and for families.

"That kind of care of a mother toward a daughter, it's a lesson that's bigger than the operating room," said Dr. Petty. "Something for all of us that have children and live in families...we can relate to that."

"I just know that they were wrong about LewLew and she could have gotten her life back earlier if they had known how to test this standing up," Laura said.