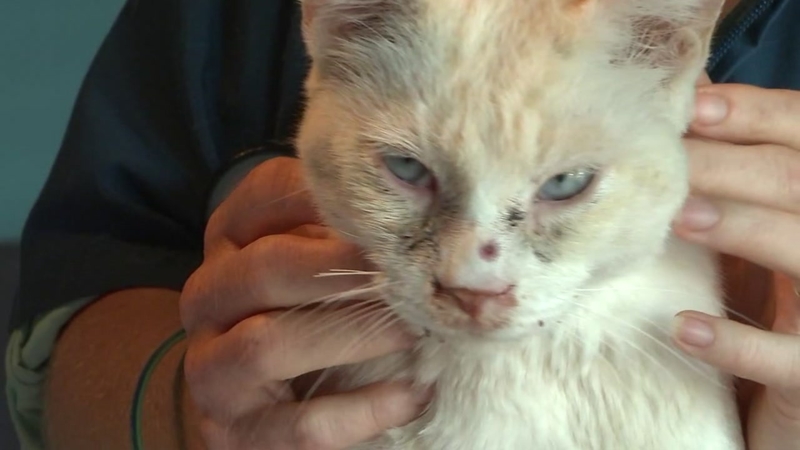 GALVESTON, Texas (KTRK) -- A 10-year-old that cat survived being shot in the face is heading home to its owner after treatment. The owner says Kilo won't be going outside anytime soon.

The friendly white cat was apparently sleeping near his home on Q Street in Galveston when someone shot him in the face at near point blank range.

What's called "snake shot" pellets were fired from the gun. A neighbor across the street is said to have heard the shot, but didn't investigate. There were no other witnesses of the shooting.

"I got home after midnight Saturday," said owner Meredith Miller, who had attended her graduation ceremony from Texas A&M-Galveston Friday evening. "I found him near the back stairs, and it wasn't until I got him to an emergency clinic that I realized he had been shot."

"How cruel does someone have to be to do something like that," she asked. "To a cat just laying there sleeping. He wasn't doing anything to anybody."

Since Sunday, Kilo has been treated at The Cat Clinic on Broadway in Galveston.

"He was in bad shape," said veterinarian Lea Fistein.

X-rays showed the snake shot pellets penetrated the skull and sinus cavity near his nose. They tore a large hole in his tongue and continued on to his paw, in which two toe bones were shattered.

"I've seen animals come in to the clinic that had been shot," said Dr. Fistein. "But nothing like this."
For several days, Kilo couldn't eat because his tongue and mouth were swollen.

"He's a fighter," said Fistein. "He's an older cat and most wouldn't fight to survive like this. He's also very sweet and affectionate."

Thursday, Kilo was purring as he stood on an exam table. His owner made the difficult decision not to visit him at the clinic, concerned that he would get excited to see her, instead of staying calm. Thursday evening, she will take Kilo home, where he will continue to recover, but he's well enough to leave the clinic."

"He won't be going outside for some time," Miller said. "He's still on medication, and I'll have to keep him away from my other two cats that he's used to playing with."

Her bigger concern is that the person who shot Kilo remains at large and unidentified.

"If this was done to a sleeping cat, it could happen again," she said.

Miller and her neighbors are warning others in the neighborhood to bring their pets in at night.