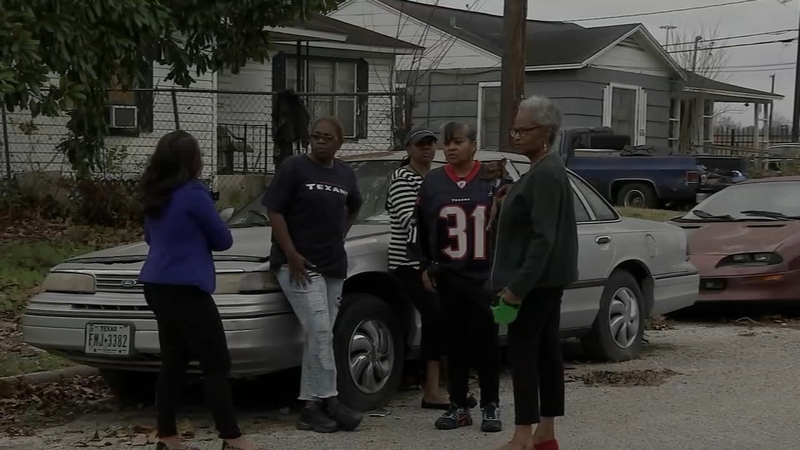 "Meetings and talking don't get things done if you don't come out here and start getting them done," Lisa Harris-Glenn said.

For years, people in the area claimed they were being sickened by chemicals at the nearby rail yard.

A recent study by The Texas Department of State Health Services may have given them the tangible evidence they were looking for. It found a higher-than-expected rate of cancer in that area, specifically of the lung, throat and esophagus.

Although the study didn't give a cause, the EPA says cancer-causing agents most likely are to blame. Legal reps for the neighbors and a group called IMPACT say the wood-preserving chemical creosote seeped into the soil, creating a hazardous plume that moved beneath at least 110 homes and churches, contaminating groundwater.

"They're not moving fast enough for me. Now that we know there is a plume and people getting sick, you know. I don't want to see nobody else die within the next six months because of this plume," Harris-Glenn continued.

Union Pacific claims it is taking steps in the right direction. They sent out a letter to neighbors, announcing they would be drilling boreholes in the coming weeks. They say it's to collect data to tell how the ground is impacted and if so - how much.

Edwards is fed up. She says only she and four other neighbors remain on her street, which sits directly across from the rail yard. The rest have died from cancer.

She's ready for her area to be cleaned up and restored once and for all.

"It's a big slap in the face, you know. We were telling you, we come to you with stuff you already know - then you want to turn around and come out like you're really trying to help. Putting boreholes in to monitor. What (are) you monitoring? That we're going to die? No, we don't want to sit and wait on that. We want you to come in and do what you need to do. Get this out of here," said Edwards.
Report a correction or typo
Related topics:
health & fitnesshoustonenvironmentcancer
Copyright © 2022 KTRK-TV. All Rights Reserved.
TOP STORIES
19 children, 2 adults killed by gunman in TX school shooting
Uvalde school shooting: What we know about 19 kids, teacher killed
Scattered showers still possible as cooler temperatures arrive
Houston-area school districts increase security after Uvalde shooting
Election 2022: Full results from Texas primary runoff elections
How to talk to kids about Texas school shooting
Matthew McConaughey: 'We must do better' after massacre in hometown
Show More
Watch Steve Kerr's raw, emotional plea after Texas shooting
Biden to sign policing order on anniversary of Floyd's death
New documents reveal possible motive in Vanessa Guillen's murder
Gun violence activists demand action addressing mass addressing
Texas leads nation in school shootings since 2013, data shows
More TOP STORIES News