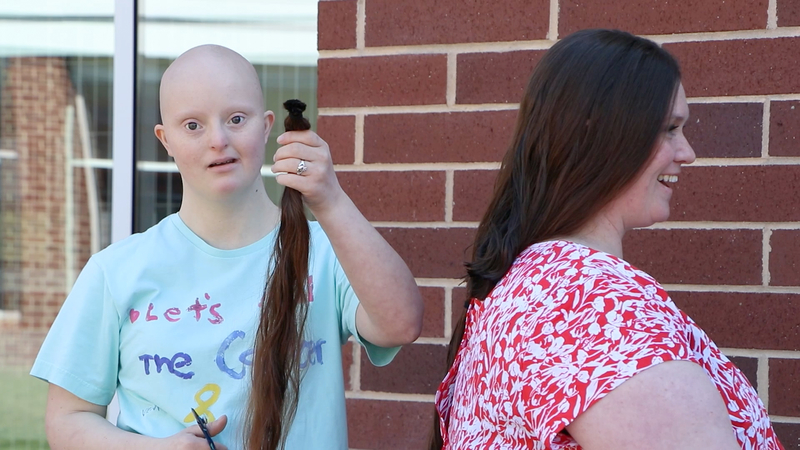 MIDDLETOWN, Delaware -- Mrs. Tina King hadn't cut her hair in two years. But that all changed in June when her student, Victoria Marsh, had the honor of snipping her locks to raise awareness for childhood cancer.

Marsh, 19, is one of few individuals worldwide diagnosed with both Down syndrome and osteosarcoma, a rare bone cancer. She has been receiving chemotherapy for the last six consecutive years as a result.

"She has been a huge motivation to myself and to her peers and staff that I work with," said King about Marsh. "Between doctor's appointments and not being able to have that social life that kind of helps us get through chemo, it became really hard."

Marsh enrolled in the Learning Independence for Everyday (L.I.F.E.) program after graduating from Appoquinimink High School. At the same time she started classes with Mrs. King, she began losing hair from her chemotherapy treatments.

"So, in order to kind of lift her spirits, I decided to let Victoria cut my hair," said King.

King and her son both had their hair cut today, which measured a total of 49 inches worth of donations to the nonprofit organization Wigs for Kids.

"Having a wig to put on just can change their whole disposition, their outlook on everything," she said.

Despite this, Karen says her daughter has decided to keep her wig on the shelf during this round of chemotherapy.

"She's just feeling super confident right now and this is kind of who she is," she said.

Karen and her husband, Rob, are working on hosting a special party for Victoria in Miami this summer. In the meantime, they hope to raise funds to promote research for a cure to osteosarcoma.

The family has established a research fund in Victoria's name.