13 Investigates: High COVID-19 rate for bus drivers and what schools can learn 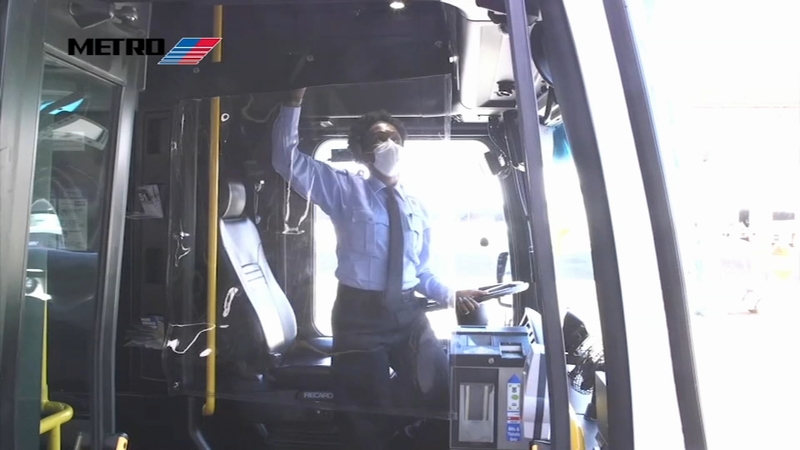 HOUSTON, Texas (KTRK) -- Claudia Brown walks 20 minutes to the bus station nearly every day. She doesn't have a car and has relied on public transportation for years - to visit her family, attend church and go anywhere else she might need to, including her job as an essential employee at a retail store.

But, until 13 Investigates asked her about her public transit experience, Brown said she didn't know her route had four positive COVID-19 cases since March.

"There are other people who have to catch the bus to go to work, go grocery shopping," said Brown, who started wearing a mask on the bus before it was mandated. "I think they should be more aware of not just the drivers, but also those that are getting on the bus and off the busses."

Metropolitan Transit Authority of Harris County (METRO) publishes the routes where drivers test positive as news releases on its homepage and also sends text messages and emails to passengers based on their account preferences. As of Friday, 178 METRO employees and 51 contractors have been diagnosed with COVID-19 since March. 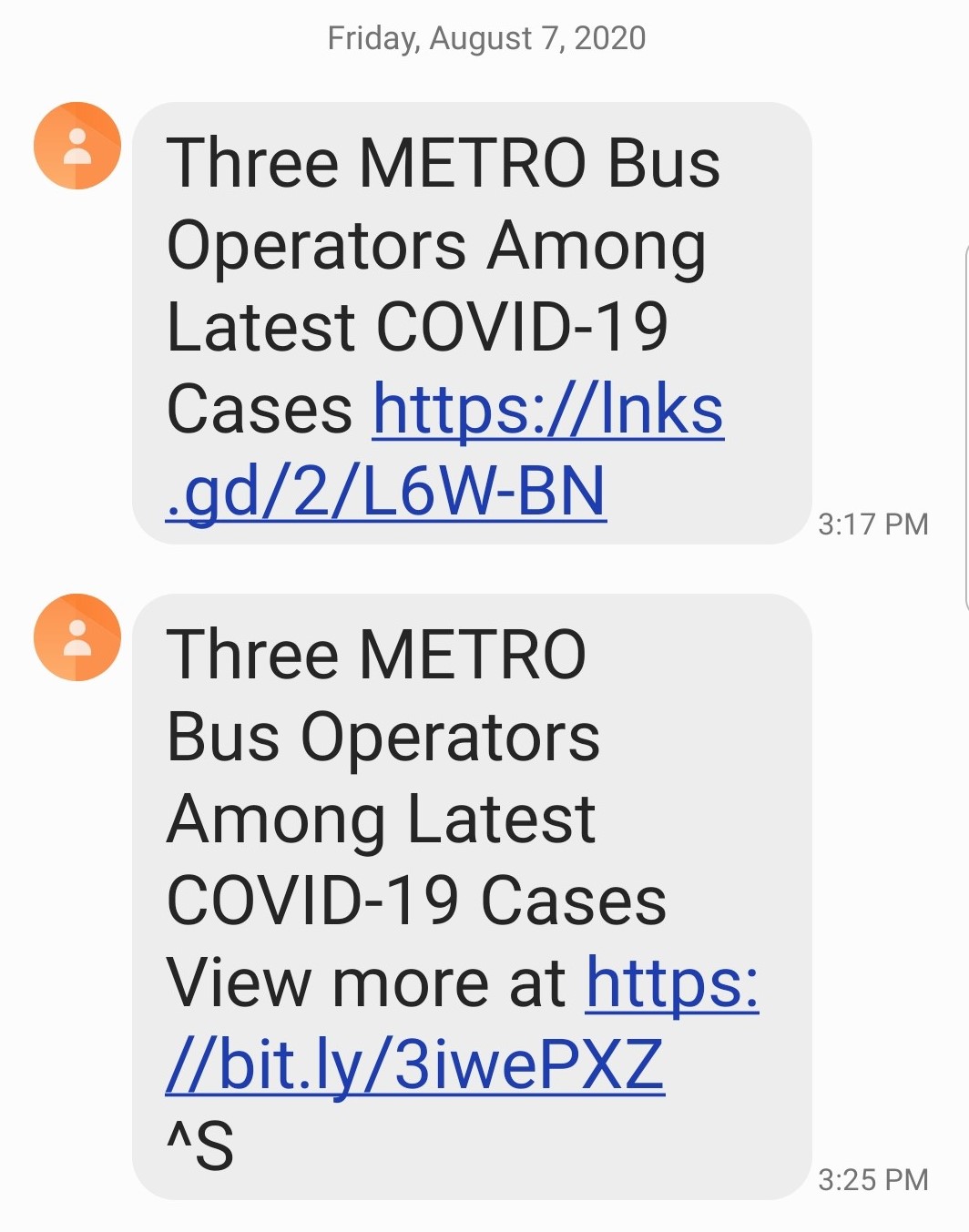 Now, with the fall semester approaching, Brown said she's worried about her son taking the bus to school.

"They can't have all the kids piled up on a bus, especially with everything that is still going on," Brown said.

Her son, a 17-year-old high school senior, will begin the year online, but whenever he's allowed to set foot on campus, Brown said she hopes he can.

"If everything, hopefully, dies down like they're saying it is and it gets out of the red, then yes, I would love for him to go back, but right now I'm still more concerned with who he goes around (with)," Brown said. "I feel like he gets a lot more in person with the teachers. If he has questions, he's able to ask and get the help that he needs in person."

John Costa, President of the Amalgamated Transit Union, a labor union that represents transit workers and school bus drivers in the U.S. and Canada, said the risk of contracting COVID-19 on school buses could be higher than on other public transportation.

"In my mind, it could be worse," Costa said. "In a regular bus, we have a backdoor boarding policy that we pushed in and demanded that they did. We don't have that in all school buses, which are smaller."

In the Houston area, METRO temporarily suspended fare collection in late March and required bus riders to board and exit through the rear doors to help limit contact between riders and drivers. METRO installed barriers for bus drivers and taped off seats to increase distancing, and in late June made wearing masks mandatory.

In July, when the agency reinstated the fees it also required passengers to enter through the front doors again.

"At the very beginning of this, we in the mass transit business were given the task of how do you socially distance on public transit," METRO spokesperson Jerome Gray said. "What we did for the public's sake, and to make sure that we're providing some safeguards for them, was to tag seats to limit where people could sit, to add (routes), to make sure that if a bus was too full the operator would flash a sign saying a bus full, please take the next one."

METRO isn't alone as public transit agencies across the nation grapple with how to keep coronavirus numbers down among drivers and riders, and how to inform customers.

"It's an awful burden and it's the type of thing that we are seeing that there's clearly a correlation to what's been happening with the reopening of Texas, much like Harris County, much like the state, we've seen our cases go up as others have and so that's disheartening," Gray said.

Thousands of bus drivers across the nation are quarantined and sick with COVID-19, and 80 ATU members have died, Costa said. He's concerned with how quickly some cities are moving to get students back on buses.

Our calls and emails to the local union representing Houston drivers were not returned.

"My highest priority is having a discussion on what does the PPE look like? Do you have it? How are we going to control the flow of the children coming on? Are we going to be checking their temperatures? Are the parents going to be involved here if a child comes up sick," Costa said. "There are so many unanswered questions on this."

The Texas Education Agency's guidelines for public transportation recommend that parents should be encouraged to drop off students or carpool or walk to school. It also mentions districts should consider requiring the use of hand sanitizer upon boarding the bus and clean buses after each trip, in addition to opening windows to allow additional ventilation.

The guidelines don't address which end of the bus students should enter and exit or if extra routes should be offered to limit capacity. It is rare for school buses to come equipped with a middle door for boarding. Rear doors are almost exclusively for emergency use only.

ATU says school bus drivers want to make sure there's a plan so they can remain safe.

"Let's educate the operators. Let's educate the parents. Let's have a discussion on how we're going to do (it)," Costa said. "This can be done in a smart and safe way. It's not impossible to do it, but to just open up and not have a plan and then put the children, the parents, our members in a position of anger and confusion, we don't need that right now."

When 13 Investigates asked hundreds of Texas school districts for their busing plans, just 14 percent reported they would limit the number of riders. Half that many said they would add routes to increase social distancing.

With many campuses starting with online learning first, most districts said they're still in the planning phase for public transportation. That includes the Houston Independent School District, which last week said it would only transport disabled and homeless students, but will reconsider closer to school re-opening in October.

More than five percent of the METRO's total employees and contractors have tested positive for the virus -- twice the rate of the state's general population. Currently METRO says its rate has been declining every week since its last peak.

Brown, who has relied on public transportation since she was 15 years old, said she's never received a notification from METRO about the drivers on her route, or any others who have tested positive.

Although METRO says it texts and emails passengers about new COVID-19 cases, Brown said she never received one. And, if there was a sign on her bus that mentioned her driver tested positive for coronavirus, she would have noticed.

"We don't have signs like that," Gray said. "That's a little challenging and difficult to do because of the nature of the buses and how they move around."

When METRO has your email address, possibly from when you buy a fare card, the agency will email you about new COVID-19 cases among employees and contractors. Their news releases online also have details about which routes drivers worked for the two weeks leading up to their diagnosis.

Gray said there's no data suggesting drivers are contracting the virus on the job. But, the most popular routes are also the routes with the majority of infected drivers.

"I firmly believe that there'd be a different conversation with our riders and the public if we had found that there was some evidence that suggested that public transit is a main carrier or a way that people are getting COVID," Gray said.

"A few months ago we put up barriers on the buses between the operators and the public where there was no contact," Gray said. "We've transitioned from temporary barriers to a more permanent type of barrier, plastic barrier so there's no contact between the public and our drivers."

Despite the issues, Brown said she's glad she can take the bus to work because without it, it would be an hour and a half walk to work.

Still, she said she would have liked better notification when a driver tests positive for the virus and hopes it won't be an issue when her son goes back to school in the fall.