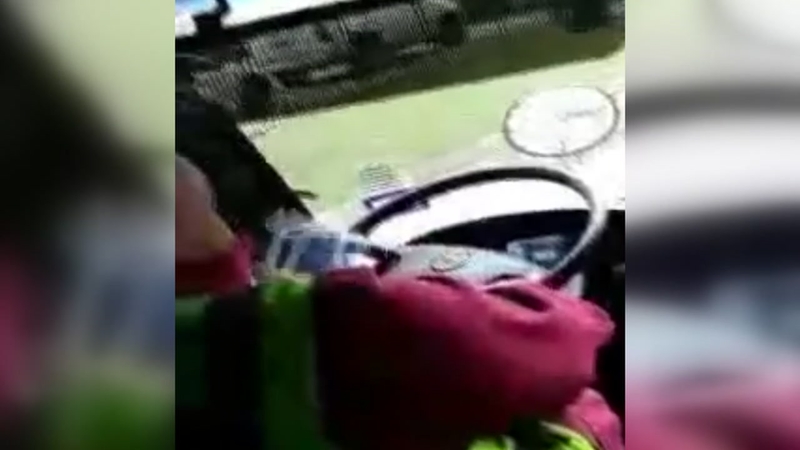 'She needs to be gone': Parents accuse bus driver of distracted driving

HOUSTON, Texas (KTRK) -- A school bus driver is accused of using a cell phone while driving students to school in southwest Houston.

"That is a problem," said the mother of KIPP Houston Public School student Christina Gerard. "She needs to be gone, this is not the job for her."

The school bus stop is located in Braeburn Terrace, near Beechnut and Hillcroft, where parents say their driver is illegally using her phone while operating the school bus.

In a video given to ABC13 Eyewitness News, the driver is looking down at her phone and making a call, all while the loaded bus is moving.

"I'm furious," said Gerard, after watching the video. "She is driving a commercial vehicle. She has other people's children's lives in her hand. This is the job she signed up to do and she needs to do it by the law."

Gerard claims the driver has been driving distracted for several months.

She said parents became so frustrated, they began filming their own videos of the driver from outside the school bus.

"We can see her with her hand up to her head using her cell phone," said Gerard. "And sometimes, she would video us, videoing her while the bus was moving."

In the state of Texas, school bus drivers are not allowed to use a phone while children are on the bus and the bus is moving, and is considered a class C misdemeanor.

The driver is employed by a private company called Student First, who was contracted by KIPP Houston Public Schools.

Gerard says she and other parents have been trying to get the attention of KIPP and First Student for months, with no action.

"At KIPP Texas Public Schools - Houston, the safety and physical well-being of our students is our highest priority. Recently, a parent made us aware of a safety concern regarding a bus driver at one of our schools. We immediately contacted the bus operating company First Student and requested the driver be removed from the route. We will continue to monitor the situation and ensure the safety of all students."