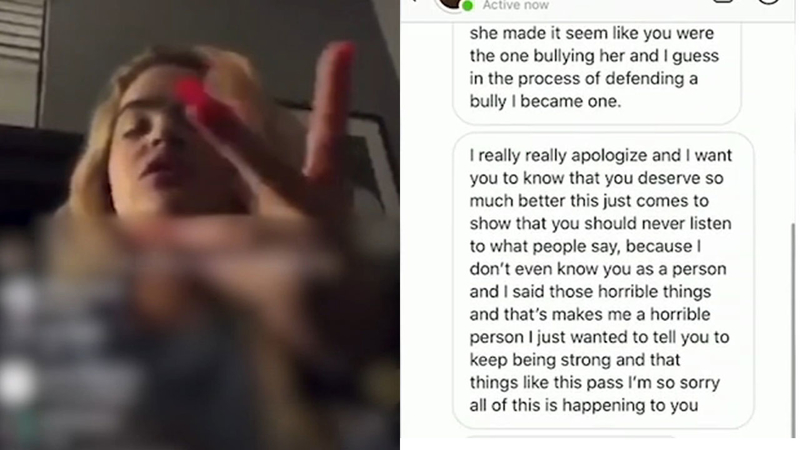 RIVERSIDE, Calif. -- A case of alleged bullying at a Riverside middle school has exploded on social media after a popular Instagrammer may have unwittingly added to the bullying.

Regardless of who's ultimately at fault, it's an example of how social media can, and in many cases does, make it even more easy for children to be bullied.

"It hurt," said Marie Prather, whose 12-year old daughter is the alleged victim. "Just watching her cry, and not wanting to go to school because she's mortified, and she's humiliated."

Prather said the bullying allegedly started three weeks ago at University Heights Middle School in Riverside, when her daughter told her that her cellphone was stolen by another student. When her daughter reported the incident to a teacher, she says other kids began calling her names like "rat" and "snitch."

"I'm a ho, I'm a slut, I'm white trash," said the 12-year old girl describing the remarks made against her. Eyewitness News is not identifying the girl because she's a minor.

"I smell bad. And they would spray perfume on me while I'm getting dressed (for PE)."

But she said the situation went from bad to worse when the alleged bully somehow convinced a popular Instagrammer to call out the victim online, this time on a live video in front of potentially more than 159,000 followers.

"Let me just tell you that you smell like fish," said the Instagrammer known as Yoamandax, followed by a string of expletives.

The alleged victim said not only was the video shared all of her followers, but it was also captured by the alleged bully and shared around the school.

"It was on her live stream, so a bunch of people have seen it," said the alleged victim.

Prather said her daughter hasn't wanted to go to school since the incident. She's reported it to school administration.

"They're basically just telling me there's protocols they need to follow, and there's nothing I can really do."

The Riverside Unified School District couldn't confirm or discuss specifics of the case because the victims are minors. But they sent Eyewitness News the following statement:

"While experience has demonstrated that the vast majority of social media communication occurs outside of school, sometimes there are cases where inappropriate exchanges between children are brought onto campus. Although there are cases where one individual or group is inappropriate toward another individual or group, social media communications are often mutual in nature.

"The Riverside Unified School District has a comprehensive Bullying Prevention policy and provides training and resources to staff while offering age appropriate strategies to students on conflict resolution. Anyone experiencing uncomfortable behavior from another is encouraged to fill out a Bullying Report Form and provide it to the school administration for investigation."

The Instagrammer has since apologized for her role in the incident, claiming she thought the person who asked her to speak out online was the person who was being bullied; not the other way around.

"I thought I was defending someone from being bullied, and it turns out I'm the bully.