Hundreds of landowners and 1,000s of migrants left in wake of border wall debate

Two years ago, the debate literally showed up in Nayda Alvarez's backyard.

She saw a two person survey crew measuring her land to see where the wall would be built, and tells ABC13 one of them told her, "They're going to build the wall right here."

Alvarez doesn't own a huge Texas ranch. Her family owns a little more than eight acres right on the Rio Grande in the city west of McAllen.

Standing in her backyard, she told ABC13 that the proposed route of the wall would be 20 feet from her back door and on top of her backyard fence.

"And then you need 150 foot of enforcement road. So, where does that leave me? With nothing," Alvarez said.

With days left in President Donald Trump's administration, she is hoping President-elect Joe Biden will act fast on his pledge to stop border wall construction.

"I am counting on Biden now," Alvarez said.

Alvarez is one of 208 Texas families in federal court right now fighting an attempted federal land seizure. The government first said it needs access to Alvarez's land for a survey, and then would seek to seize it and compensate her. She has fought in court, at her own expense, and on her home too, by painting a message on her roof when the president flew over two years ago to see the border. It reads, "No Border Wall."

Looking up at it, she told 13 Investigates' Ted Oberg, "I'm pretty sure he's seen it by now."

If president Trump has seen the message, it has not slowed down the project. This week the President celebrated 450 miles of completed border wall. Many more miles are yet to be built and lawyers for the U.S. Government are speeding up their fight against Texas landowners like Alvarez.

In November, according to the Texas Civil Rights Project, the U.S. Government filed 14 new lawsuits against Texas landowners to seize land for the border wall. In December, it nearly doubled to 26 new suits, nearly one every day. It was the most filed in a single month in two years.

While Americans stand off against their own government in court, migrants keep showing up and their advocates are eager to see construction end. Sister Norma Pimentel of the Catholic Charities of the Rio Grande Valley told 13 Investigates, "I certainly hope that other measures are taken to protect our country and not something like the wall."

When migrants arrive, Pimentel's are some of the first welcoming arms they find. She's run a migrant center for years. We've watched it grow. It's even garnered the attention of Pope Francis. Despite declared success building the wall, the need isn't going away.

While the numbers down from all-time highs in 2019, in December 2020, 48,287 undocumented migrants were caught coming across the border in the Rio Grande Valley alone. That's an 85% increase from just one year earlier, but now under the current Remain in Mexico policy most migrants are stuck in camps in Mexican border cities waiting for asylum hearings. Sister Norma is there too, "We've pushed them to a place where they are not safe and where they are hurting. Nothing of what is done as far as a wall or any actions against anyone, I'm here to try to help those that are hurt because of it."

Looking past the debate, the people working the border will continue to use whatever tools politicians give them. "This is a very good question. Does it end when you get a different president there?" Art Del Cueto, a border patrol agent and Vice President of their union the National Border Patrol Council told ABC13. "I always tell people border security has nothing to do with a political party. It shouldn't, I think it doesn't matter what side of the aisle you are standing on at the end of the day, we all want to feel secure in our homes."

Del Cueto, who grew up on the border before he worked it, supported the wall and President Trump. Now that the policy may be changing, he reminded us "There's a lot of people that believe that when people start speaking about a wall, it's the be all, end all, build a wall. It's a 100% effective. No one has ever said that." He continues to push for more agents on the ground plus technology above and below it to give those agents a better chance at catching migrants sneaking across.

For him too this fight will change but won't go away. "It's not a party issue. It is something that affects everyone. Border security, security is a big thing. It always has been, it will continue to be," he said.

What Texas could have done to prepare for mass outages 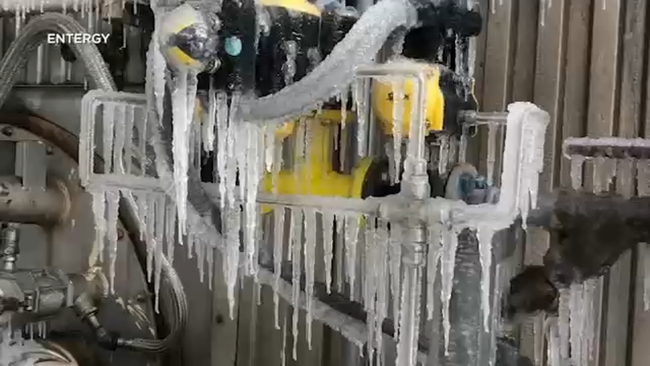