Crisis on the Border: ABC13 joins a ride-along with border patrol 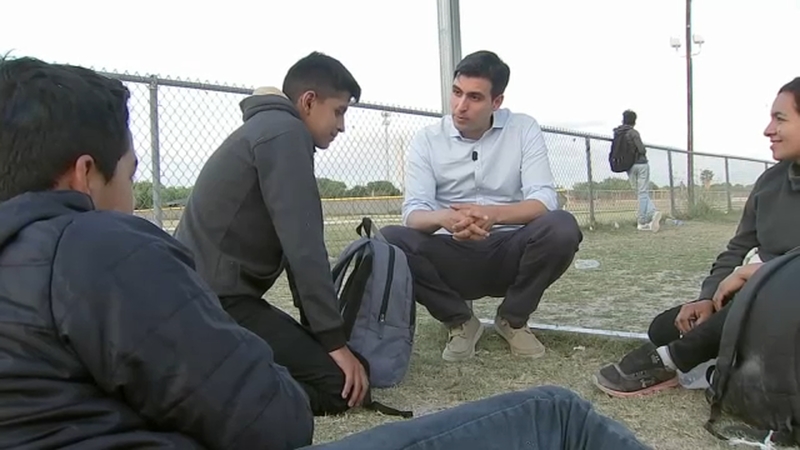 MCALLEN, Texas (KTRK) -- Border Patrol agents apprehended 22 migrants only minutes into our ride-along. The migrants told us they left their homes in Central America weeks ago but found each other along the way and then paid "coyotes" to get them across the border undetected.

The "coyotes" are a couple of teenagers who work for Mexican cartels and were also apprehended.

"How much did they pay you?" I asked the teenagers in Spanish.

"Don't talk to him about that," they told each other.

The average rate is $3,000 - $4,000 per person, agents told ABC13. Mexican cartels enlist young men like them to collect money and guide migrants. They get richer when the border gets busier.

Federal agents have never stopped so many migrants along the southern border. In recent weeks, they've stopped more than 7,000 per day, on average. March 2022 beat the record for most apprehensions ever recorded in a month: 221,303. That's only those who are caught.

We wanted to get a closer look at the unprecedented situation at the border, knowing that it's about to get more chaotic. U.S. Customs and Border Protection is preparing for a worst-case scenario of 18,000 crossings along the southern border per day.

We also know that Houston is and has always been a top destination city for migrants. Many of the migrants we encountered said they wanted to end up in Bayou City.

"With Title 42 going away, we'll see another increase of migrants. Our facilities are only meant to hold so many individuals," said agent Jesse Moreno with the Rio Grande Valley Sector.

The RGV Sector of Customs and Border Protection is responsible for nearly a third of all apprehensions along the Southern Border and nearly half of all narcotics seizures.

The RGV processing facilities - including a new one about to open - will be able to hold 5,400 migrants. That's more than the sector expects daily, even in a worst-case scenario. But migrants sometimes spend more than 24 hours in a processing facility, a recipe for disaster.

"We have some plans in place," Moreno said.

The CBP has released a 16-page report detailing its plans to deal with the unprecedented influx of migrants, including adding agents and optimizing resources. National Guard troops are also helping, though without law enforcement authority. The report said that plans are in place for multiple potential worst-case scenarios.

On Tuesday morning before dawn, photographer Noe Cumplido, producer Uriel Posada, and I joined Moreno and other agents for one of the first ride-along allowed by CBP in two years since pandemic restrictions began. In several hours, within only a few miles, we watched agents track down migrant group after group. Most single adults. But also some teenagers and mothers with young children.

We chased one group down to the Rio Grande River. Two men jumped in and swam back to Mexico, while the other two surrendered. A K-9 agent tracked down one group hiding under a van at a U-Haul rental facility near the border fence.

We also visited Reynosa, Mexico, across the border from McAllen, Texas, where 2,000 or so migrants - the overwhelming majority of whom were expelled under Title 42 after attempting to cross - live in a tent city awaiting the end of Title 42 when many say they will immediately try to cross again to ask for asylum.

"We've been here for one month," said Luisa, who traveled with her two sons from El Salvador and hopes to end up in Houston with her brother and other relatives.