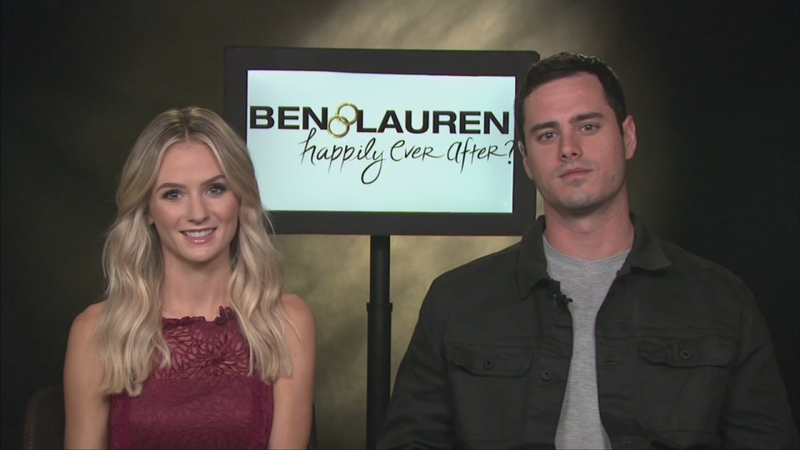 Ben and Lauren talk 'Happily Ever After?'

NEW YORK -- The untold story of what happens after "The Bachelor" is over and normal life ensues is finally revealed as we delve into the lives of Season 20's Ben Higgins and his fiancee Lauren Bushnell in the series premiere of the spin-off "Ben & Lauren: Happily Ever After?"

The two stars talked about their new Freeform series, which premieres Tuesday night at 8 p.m.

"Right after 'The Bachelor,' we did a million interviews, and we were like, we just want to go back to normal life, go grocery shopping, and that was very much the case," Lauren said. "This opportunity was presented to us...and we realized that life was not going to go back to normal. We were very much in the public eye."

In the premiere episode, titled "Moving On," Ben and Lauren begin to settle into their new normal, but the reality of fame and past relationships cannot be avoided. The couple takes a trip to Los Angeles to attend the "After the Final Rose" special from JoJo Fletcher's season of "The Bachelorette," which forces Lauren to deal with an important issue that's been weighing on her relationship with Ben - the fact that he said "I love you" to both women.

"Hopefully this series can explain and show where Lauren and I are as a couple," Ben said. "That we are really engaged, that we have moved on from JoJo, that we are planning a life together."

Will Lauren be able to trust her future husband when he sees JoJo again for the first time?

"I hope viewers realize that first and foremost, we are two very real people," Lauren said. "We have feelings, and we have ups and downs, and we have struggles. And we hope people can relate."

Additionally, while former "Bachelor" contestants Haley and Emily Ferguson are in Denver, the twins and Lauren attempt to pick out and install a new toilet in Ben and Lauren's home, which does not go as smoothly as expected.

"I feel like those are exactly the people you want to call if you want to make changing out a toilet a good time," Lauren said.

"Not to get it done, but to make it a good time," Ben added.

There are also appearances from several other "Bachelor" alum, including the controversial Chad Johnson, who the couple invited on a camping trip.

"We invited him to come camping because we had met him at JoJo's 'After the Final Rose' and really felt like we saw a human there, and saw someone who is perhaps a little lonely or has been misguided," Lauren said. "I felt like we should take some time to reach out to Chad...I still think that there is good in Chad, but that episode itself had a lot of drama...you'll have to watch that one."

And as for what it's like to again see his life and relationship play out on the screen, Higgins had a slightly different take than his time as "The Bachelor."

"It's fun to even watch back, and I typically don't say that about stuff that we're on," he said. "But it's fun."

The series will follow Ben and Lauren as they prepare to walk down the aisle and begin their life together without the splendor of exotic dates and fantasy suites.
Related topics:
arts & entertainmentben higginsentertainmentbachelorcominguprosesabc premieresbachelorette
Copyright © 2021 KTRK-TV. All Rights Reserved.
ABC PREMIERES
Fresh perspectives on reimagined version of 'The Wonder Years'
Topher Grace, Jimmy Tatro talk season 2 of 'Home Economics'
Who won 'Dancing With the Stars'? Full list of former winners
Derek Hough talks about being the 4th judge on 'DWTS'
TOP STORIES
HPD leads procession for fallen senior officer
3 taken to hospital after car T-boned HFD ambulance, witness says
Who killed this 19-year-old woman in Dickinson?
Gov. Abbott to sign anti-smuggling bill in Rio Grande Valley
Driver rescued from overturned big rig on North Loop at I-45
Front brings winds, cooler start to the day
Houston girl goes viral after accusing mom of being an alien
Show More
10-year-old boy hit by vehicle in Atascocita, deputies say
Biden to double US global donation of COVID-19 vaccine shots
Fresh perspectives on reimagined version of 'The Wonder Years'
Packers' star says chain with dad's ashes lost in endzone was found
Officials: Many Haitian migrants are being released in US
More TOP STORIES News