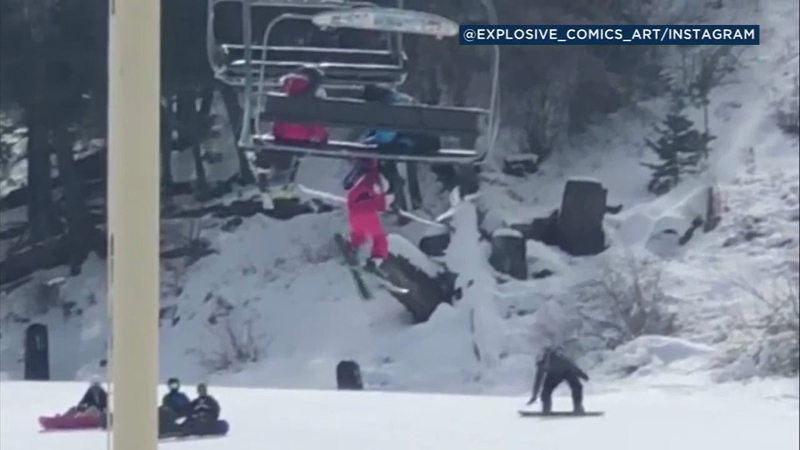 Parents speak out after child dangled from Bear Mountain chairlift

LOS ANGELES -- The family of a 5-year-old girl who was captured on video dangling from a Bear Mountain resort chairlift talked about the harrowing incident Monday.

In video captured by witnesses, the little girl dangled off the ski lift for a short time before being caught on a tarp below.

The incident happened Saturday morning, her parents said. The girl, named Sara, and her 7-year-old sister were enrolled in ski school for the day. Their instructor was sitting between them when Sara slipped off her seat that her parents said was iced over from freezing rain the night before.

Sara's instructor caught the hood of her jacket and held on for more than a minute.

"I kept hearing people screaming and yelling," her mother said.

The girl's mother, who did not want to have her name released or her face shown on camera, was three chairs ahead.

"I turned back and I saw Sara dangling from the chairlift and she was just there and she was dangling. I couldn't do anything about it," she said.

Sara's mother saw her drop and then had to ride to the top of the lift and back down again to find out how she was doing.

"He said that she had choked on her tongue and she was unconscious so he was unbuttoning her to do CPR," her mother said.

Whether it was swallowing her tongue or her jacket cutting off her air supply around her neck, Sara passed out but soon regained consciousness.

"She doesn't have any serious injuries, but immediately I noticed a lot of bruising around her neck," her father said.

Her mother added that Sara said her tongue and legs hurt and that she has bruising around her neck and legs.

"I mean thank God. This could have been so much worse," her mother said.

Sara's parents said she is now afraid to get back on a ski lift and her sister, who witnessed the accident, is pretty shaken up, too. But the family does not plan on contacting a lawyer.

"For us, right now, I just want to see that they're proactive and that they do something about it," her father said.

Eyewitness News reached out to Bear Mountain resort and the instructor for comment on the incident.